Mausoleum of Mir Saeed in Kermine is one of the earliest surviving burial structures in Maveraunnakhr. It was constructed in X century in the town near Navoi. Experts indicate its nearest equivalents: Samanids mausoleum in Bukhara (end of IX-X centuries) and Arab -Ata Mausoleum (last quarter of X century).

Mausoleum of Mir Saeed Fringe belongs to the so called centric mausoleums with stylistic features and decoration of the end of X - XI centuries. Currently Kufi inscription of the portal is almost completely lost.

Despite the fact that the base of the mausoleum is very (i.e. in the form of a quadrilateral is a trapezoid, the hexagonal shape), the masters were easily managed in an original manner a constructive solution.

Analysis of slag shows that raw materials did not come from one particular field. It is assumed that the materials for construction could come from Altyntopkana, Kanji - Tabosharskih mines and workings of the closest Kurgashinkana. 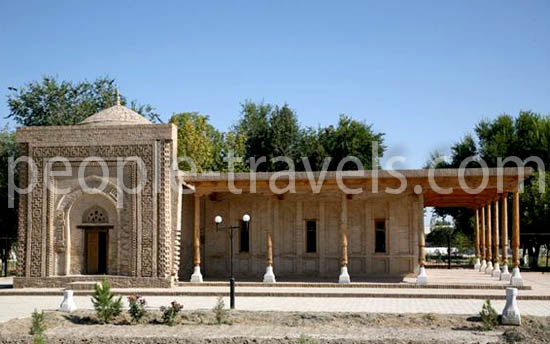 Most likely, this is not a consequence of the administration, and one of the characteristic phenomena taking place in the region's economy in the X-XI centuries.

Among local people have opinions about what the mausoleum were restored in the late XVIII century. This is confirmed by inscriptions, carved doors bred on the south facade of the monument.

From ancient patterned carved columns of the mausoleum survived only 15 columns, 8 columns are stored in Tashkent in national museum of Uzbekistan.