Kurgan mosque is a historical monument of architecture, located in the small village of Vangozi Kyzyltepa district of Navoi region. Unfortunately, the exact date of its construction is not known, neither the history of the addition of names of architects, or repair or alteration of monuments, and even any information relating to its history, some not. This gives reason to believe that the monument had no research, design and repair and restoration work.

As a result of complex historical and archival carried out works and was  found out that the mosque was originally built mound with double iwan (a room that is on three sides walled, and with the fourth side - open): Eastern and Northern. However, up to now they have not survived.

It is worth noting that the current Kyzyltepa District in ancient times was part of Bukhara. So when in XVI century when Central Asia was confirmed state of Sheibanid, including changes occurred. This also affected the architecture and, of course, the culture of the state. Many of the Emirs of Bukhara were very fond of music and poetry in the Tajik and Uzbek, appreciated calligraphy, miniatures. Therefore, they paid more attention to the construction of beautiful buildings, not inferior to the beauty and uniqueness of the great buildings of the Timurids. In the XVI-XVII centuries Bukhara reaches its peak due to the fact that the city change radically, gets a modern twist. This has particularly affected ensembles, which are defining the face of the city in those days. 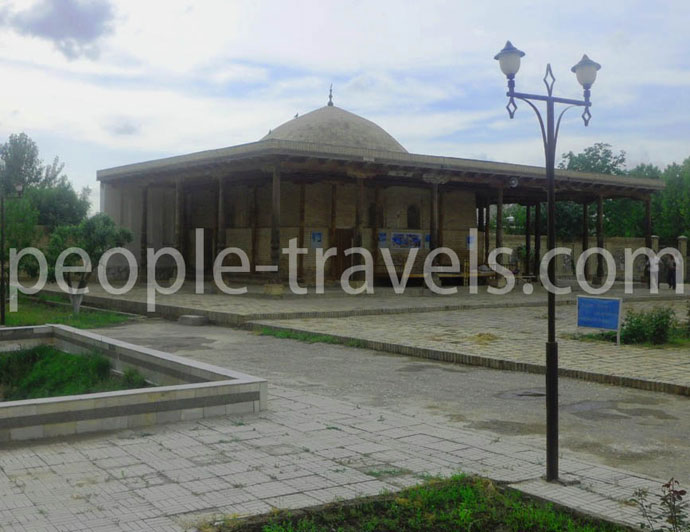 These changes are evident in the mosque mound. Although at the moment the monument is located in an abandoned and even emergency condition. The walls of the mosque are made of burnt bricks. Now they have a great destruction in the lower parts. It is known that the overlap aivan was flat, and rested on beams of wooden columns and on the wall areas of the winter. However, so far it was completely lost.

The mosque had a very beautiful decoration. Here are preserved following: niche decorated with lancet cones, stalactite vault, the original painting with geometric designs on the front wall, on the outer walls of the mosque in the upper half of the traces of paintings. However, all this is due to lack of maintenance has lost its original sophisticated look, thus it is in poor condition.