In ancient times the area of Kizilkum desert was inhabited by farmers who cultivate vast areas of irrigated land. Endless invasions of conquerors of Darius I, Cyrus, Alexander the Great, Tamerlane, Genghis Khan, Nadirshakh undergone this region. But the old times resemble the ruins of fortresses, settlements. From a distance they look like stacks of straw.

Their precise contours are embedded in the horizon almost right trapezoid. Near shapeless mound or group of hills up to 10-15 meters it is mostly seen ancient masonry of unbaked clay bricks. Here you can find the guard towers and the front gate, towns with shopping arcade, workshops potters, engravers, etc. Here is also located Altynasar fortress that is more memorable and not just because it is preserved better.

Flora and fauna of the desert due to lack of moisture has a number of unique adaptations to arid and hot climate. In order to survive in the heat, the plants have a strong root system to a radius of 30 m, leaving a depth of 20 m. For prevention of evaporation plants have thick omission or no leaves. Many plant leaves are small, with a brilliant waxy coating, as, for example, sand acacia, or in the form of elongated leaves flagella.

Some plants are able to supply moisture and nutrients, to fall into a long period of rest. Animals also have a number of mechanisms are adapted to survive in the desert. Many reptiles dispense water to give a small amount of moisture from food. And some of the animals, like many plants can hibernate the unfavorable season. Many are able to travel long distances in search of water. For animals living conditions in the deserts is heavy - the harsh climate, lack of food, few natural shelters. 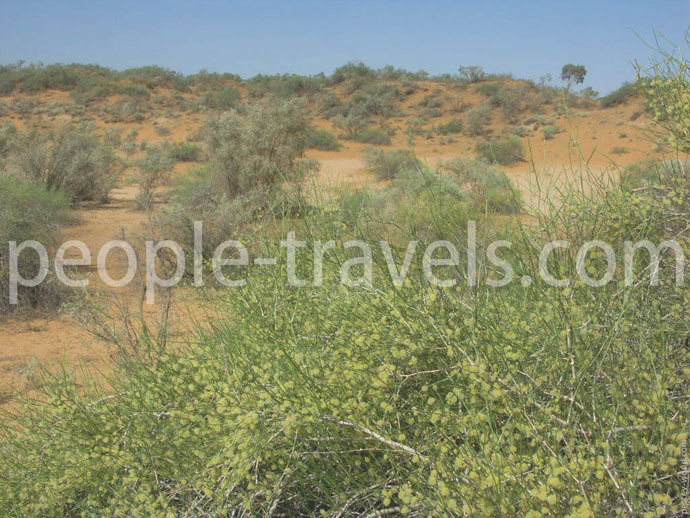 Fierce competition among the desert conducted over a period of time when there is a constant weeding and adaptation to desert conditions. To the deserts of Central Asia, for example, is characterized by numerous reptiles, rodents, invertebrates. In the warm season there is great activity than in winter, when life in the desert almost to a standstill. Part of birds migrates and many species of animals lie dormant.