Kasim Sheikh Khanaka is located in the city of Navoi region - Karman, dating back to the XVI century, becoming one of the revered sites in the country. In memorial complex at the grave of Sheikh Kasim, who died in 1571, were originally built Dakhma, three-chamber marble portico with three-span memorial mosque and fence yard.

Right next to a mosque erected soon Khanaka that includes cross-shaped plan room and corner of the room. On three fronts marked arched portals, the main thing - especially high.

In the overall composition dominates the dome on a high drum with traces of majolica cladding based on intersecting arches girth. The central dome and cupolas of angular interiors decorated in the form of elegant stucco lampshades on grids thyroid sails. 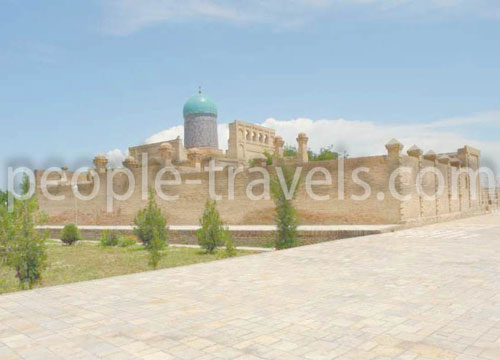 In 1910, the south-west of khanaka, was constructed a second fenced yard with dakhma, summer mosque, and outbuildings.It should be noted that in the territory of Khanaka buried father of last Emir of Bukhara Alimkhan, Sayyid Abdul Ahad Khan Bahadur.

He is buried in front of the tomb of Sheikh. According to scientists, the ruler Abdulahadhan deeply believed in the ideas and teachings of Sheikh Kasim, that was the reason for his burial next to this man.

Kasim Sheikh Khanaka distinguished by some pretentiousness plan and overall composition. Facades are niche portal adjoined side wings walls with single-tiered arched niche; the main facade is highlighted with peshtak. 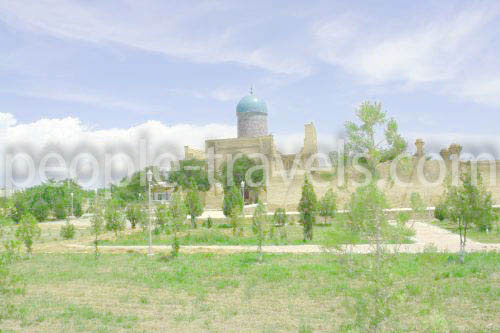 Central Hall underlined decorative domes on a very high drum, which is based on a system of diminishing octagons.

Today, in accordance with the state program for the restoration and reconstruction of historical monuments in Kasim Sheikh Khanaka are already approaching the end of work on the restoration of the lost species and summer mosque dakhma. These works began in July this year.