Navoi city has a good infrastructure, which is presented not only for the residents of this city, but also tourists. In the city of Navoi there are many interesting places that can be quite interesting.

Among the shady avenues of Navoi city there are all kinds of cultural centers, theaters and cinemas.

Cinema “Uzbekistan” is one of such places of visit.

It is a large, modern movie theater, which was built in the second half of the 1970s. In the cinema “Uzbekistan” there is a bar and a restaurant, which have a separate entrance on the right side of the building.

Cinema "Uzbekistan" usually shows Russian and Uzbek films. Sometimes, foreign movies, translated into Russian, are shown here. Also, such events as festivals and performances are held in the Cinema “Uzbekistan”. 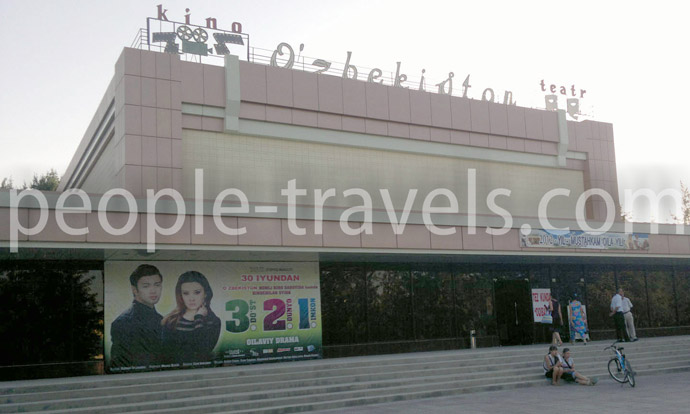 Cinema "Uzbekistan" in Navoi is the largest movie theater of the city. In the cozy hall of technically equipped cinema "Uzbekistan" sitting in comfortable chairs you are happy to spend time watching the premiere of the next opening night.

Town dwellers like to visit Cinema "Uzbekistan" in Navoi, because for many people this place is associated with their youth, first love, student days and other memorable events.

Peopletravel Company is ready to organize tours to Uzbekistan, including Navoi with visiting sights of this marvelous city.