History of Navoi. A few words about the distant past.

Despite of the fact that the history of the youngest city of Uzbekistan started from second half of 20th century, in ancient times through the city were important trade routes, including the famous Great Silk Road. The population of Navoi reached in 2011 more than 170,000 people. Here Uzbeks (76. 4%), Russian (14. 6%), Kazakhs (1%) and other nationalities (8%). In ancient times, the city played an important role Kermine that connected Samarkand and Bukhara. This magnificent city is a gem of a rich history of Uzbekistan.

According to Navoi history, the land on which today the city is, truly cherishes the memory of millennia of its centuries. Archaeologists have found evidence of the existence of numerous cultural centers are ancient Saks, Khorezm, Bactrian. Excavations Varakhsha and Babkent enabled the modern world to learn about the ancient civilizations that were destroyed by raids and strife, and subsequently buried in the sands of time in the mighty.

Earlier in place of Navoi was Kermine village, once part of the Bukhara Khanate. In 1958, according to the decision of the Government in the area of the village began construction of a mining and metallurgical complex, and was founded a new town, which was named Navoi, in honor of the famous oriental poet Alisher Navoi. This highly industrial city has a good geographical location: it is situated at an altitude of 347 meters above sea level, on the left bank of the river Zarafshan, 100 km north-east of Bukhara.

The pages of Navoi history

Earlier in place of Navoi was Kermine village, once part of the Bukhara Khanate. In 1958, according to the decision of the Government in the area of the village began construction of a mining and metallurgical complex, and was founded a new town, which was named Navoi, in honor of the famous oriental poet Alisher Navoi.

The new city was built according to a single master plan in 1960. The peculiarity of its construction is the construction of sectional homes and gallery, the use of small architectural forms, the abundance of greenery, fountains, pools, which give the city a unique aesthetic and expressive look. For the future, the city was chosen by the relief area is calm, elongated in a north-south for 8 km, between the old district center Kermine and a small settlement near the railway station of the same name. The authors of the master plan of Navoi were Korotkov, VN Ivanov, IB Orlov, NI Simonov and engineer Mr. P. Smorodin. For conversion to the life of the plan architects in 1969 was awarded the State Prize of the USSR. But the prize was worth the give and not only for that. At the very beginning of its work on erecting a new town in the Central Asian region, architects and builders are faced with many difficulties and challenges: climatic, technical, social. Building, engineering and irrigation facilities are being built on the edge of the sand Kyzylkum where common are withering sultry winds and dust storms, summer heat can sometimes make burning hot air temperature up to 40 43 C, and there is no place here that would help to escape from the cruel heat. Besides all this greatly complicated by salinity and soil subsidence, their aggressiveness to metal and concrete, the complete absence in the early construction of the base of the building industry and the majority of traditional building materials bricks, wood, cement, and finally, limited areas suitable for urban development. 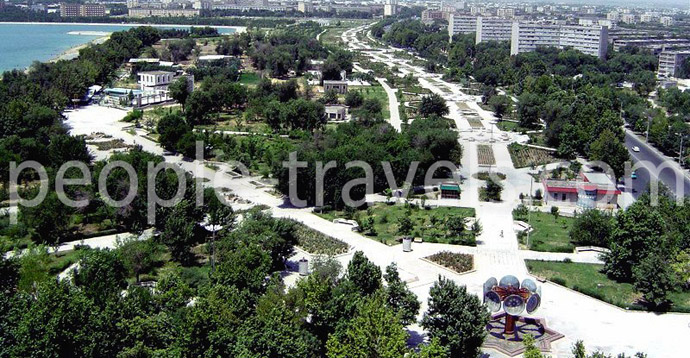 All industrial enterprises are concentrated in the industrial zone at the western border of the city, 2 km from the borders of residential areas. In its structure, the city of Navoi best meets the requirements of modern urban planning, which is a rational complex organization of industrial zones, residential areas, a network of public and community institutions and transport, which provide the best working environment and recreation. FIEZ Navoi. FIEZ abbreviation stands for Free Industrial Economic Zone in Navoi. President of Uzbekistan Islam Karimov: "Free Industrial Economic Zone in Navoi became the first full-fledged free zone in the CIS, without exaggeration, to have a positive impact on the economic development of not only the Republic of Uzbekistan, but the entire Central Asian region in general.