In Namangan there is a tourist complex Muvlon-buva that attracts attention of all guest of this city. This complex was built in 1806 by order one of the Kokand ruler and it is dedicated to the local poet, buried here.

The Muvlon Buva has a small mosque for funeral prayers where from its small (7 * 7m) square room; through the barred window you can see a modest headstone.

Around the front entrance there are rectangular and arched niches, and above the portal of the main facade - decorative barred arcade. The remaining facades are decorated with nothing, laying them bare.

Ganch was very popular to those days in Central Asia that was used in interior decoration. The walls are also painted in oils; in particular, the mihrab - the mosque for traditional niche indicating the direction of Mecca, painted on the wall, and on the panels depicts a vase of flowers.

Geometric patterns of the walls organically interwoven with verses in Arabic script. Poets who were acquainted with Mavlon-buva devoted him poems and wrote them on the walls of Ziyarat Hona. When no space left they began to write poems in a book, which is stored here. 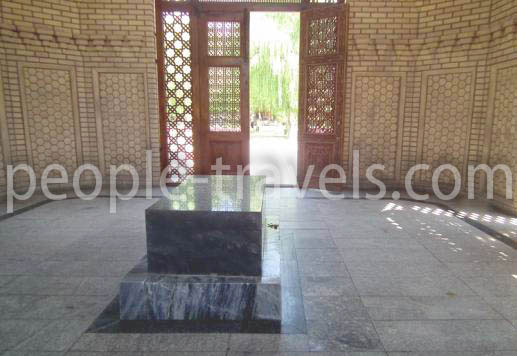 Decoration is also very interesting. Red is a fire, which does not burn that also symbolizes the color of blood and our mortal world. And the white color means a ray of light, guiding and giving us a chance to correct. Struggle over this improvised stands design resembling portal. This is a traditional element in the architecture of the Zoroastrians. The contrast of white and red gives the monument scale and hidden meaning.

Unique mosaic ornaments of the facade have survived and the memory of the masterpiece. And this palace still continues to delight the eyes of connoisseurs.