In the XIX century in Kokand were forty madrasah - Islamic higher education institutions. Unfortunately, up to now remained only a few of them, including the largest in madrasah - Narbuta-biy. It was constructed down in the middle of the XVIII century on Chorsu square.

Due to the series of victories of Kokand Khan were captured many prisoners, including artisans, and among them Bukhara architect Muhammad Salih Kasim Usto. And during the construction of Narbuta-biy madrasah this well known architect took an involuntary participation along with Kokand masters.

Blank walls of the side facades of single-storey buildings had the length of more than seventy meters. The main portal is oriented to the north, was isolated with high peshtak, which gave a monumental view and even greatness. Planning of this madrasah vividly recalls similar monuments of Bukhara. 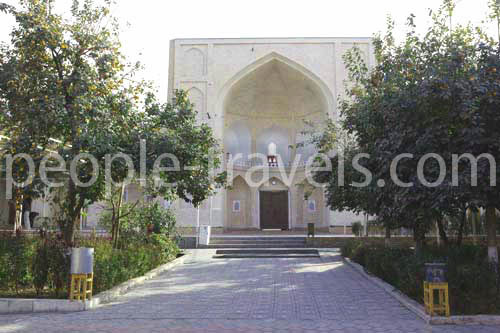 To the left of the main portal was built domed mosque. The inner space of the mosque was covered with twelve lancet windows cut into fairly high cylindrical drum. On the right training room was darshona (audience for studying). Orthogonal courtyard was surrounded by twenty-four chambers, where lived students. Directly opposite the main portal was a deep aivan for summer classes.

Perhaps the most remarkable thing in Narbuta-biy madrasah is almost complete lack of decor, which, however, creates a lasting impression of austerity and rigor of its architectural design. Interiors glow with white plaster of Gancia. 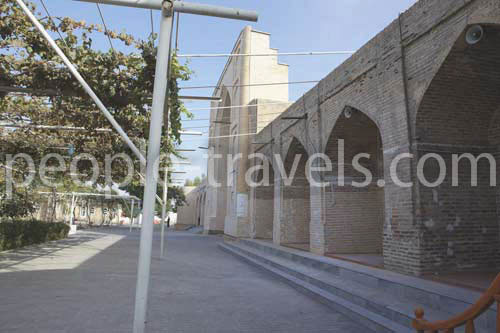 Only the front door decorated with carvings, which combines geometry with floral motifs. A modest stalactite cornice and mikhrab niche decorated with oriental pattern.

Nowadays Narbuta-biy madrasah again serves for believers, where nearly 80 students of the cities of Fergana region study the Koran, Hadith and Arabic.