The history of the construction of the mausoleum Modari Khan linked with the name of the famous Uzbek poetess Nadira. Her poems entered the golden treasury of Uzbek poetry, and buildings built on the behest of Kokand.

It is a historic complex located in Ferghana city. This historical complex includes a mosque, the monastery for pilgrims (hanaka) and two Hazira (tomb in the open air). The date of commencement of construction is considered to be in 1571. According to historic chronicles Modari Khan Azizan Karminagi (1500 - 1578) was popular religious and political figure of the head of the Sufi Order Yassaviy. 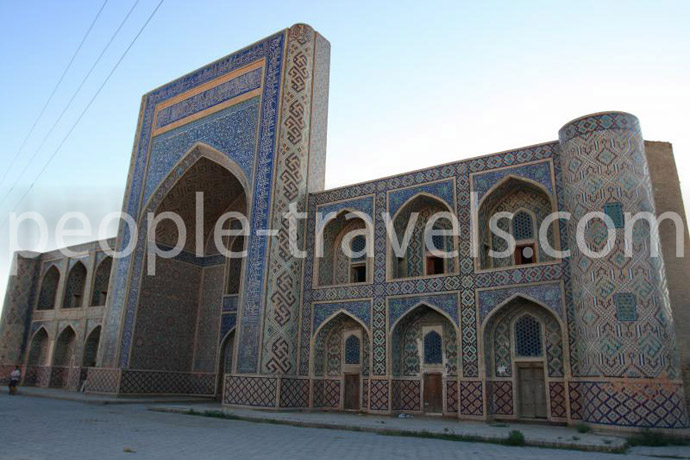 Modari Khan became famous thanks to its peacekeeping activities in the period of internecine struggle for power in Mavara. She helped the future ruler, Abdullah Khan II (1557-1598), in the fight against the combined forces of Samarkand, Tashkent and Turkestan. Modari Khan participated in military actions for the defense of the fortress, hid the royal family and their servants in the depths of the fortress.

In 1579 Modari Khan died for unknown reasons, and was buried in the center of Hazira. Over his grave was set large dakhma (tombstone) from marble. Many scholars argue that the first building on the site of the mausoleum was built by Sheikh Kasim, and until his death served as a madrasa. There is some evidence that the building served as a mosque (namazgoh). It held mass prayers in Ramadan-Fitr and Eid al-Adha.

A year later, the burial place of Modari Khan visited Abdullah Khan II; he held a funeral and began construction of hanaka (pilgrimage) near Hazira. Later, near the tombstone of Modari Khan were buried her followers.

By the end of the 16th century was built a mosque. During the construction of the mosque was used burnt brick. The building has a square shape with a large dome. Three of the four sides of the mosque are the façade, which marked arched portals typical Islamic architecture of the Middle Ages.

In 1910, died last ruler of Bukhara Emir Abd al-Ahad. He was also buried near the mausoleum. After some time, it was a marble tombstone (dakhma). Construction work was carried out during the year. During this time was increased courtyard ensemble. Also on the main facade of Abd al-Hazir Ahad were built mihrab niche and entrances khujdras. To the south of the mosque was built stone courtyard, which can accommodate up to 2,000 people.

This historic complex became one of the centers of religious pilgrimage in Fergaha valley.