In the XVIII – XIX centuries, during the period when Kokand was the center of huge and large state, many big and beautiful mosques were erected in the city. In compliance with written sources it is known that there were 230 quarterly and 18 Friday mosques in the capital city of the Kokand khanate.

Peopletravel Company makes haste to advise you to include visiting of Kokand to Uzbekistan tours 2016.

In the old part of Kokand monuments of national dwelling architecture, mosques, madrasahs and memorial constructions of the XIX – XX centuries remained.

Jami Mosque in Kokand is the memorial of history and architecture, which for several ages had been the example of unique architectural style of Central Asia.

History of Jami Mosque in Kokand

Old Jami Mosque is the genuine adornment of the Kokand square Chorsu. The town dwellers cannot amaze the city without this majestic mosque. It seemed, the mosque was always here. And, indeed, due to the historical chronicles of the IX – XII centuries we can observe records about the mosque in Kokand, located on the same place on Chorsu square. But during the Mongol conquests Jami Mosque together with the whole city was demolished.

However, the present mosque dates from the XIX century. In 1805 the Kokand ruler Olimkhan started to build Jami Mosque, but the building activity was stopped. The dean of the mosque opposed erecting of the mosque by the means of people, taken by force. And only in 1814 the educated and humane governor of the Kokand khanate Umarkhan (Olimkhan’s brother) again started to erect the mosque. For managing the construction works Umarkhan invited the gifted architect from Ura-Tyube. 200 talented builders worked under chief architect command. Two years later Jami Mosque was erected. It was a truly monumental construction. The fame of its beauty spread far. 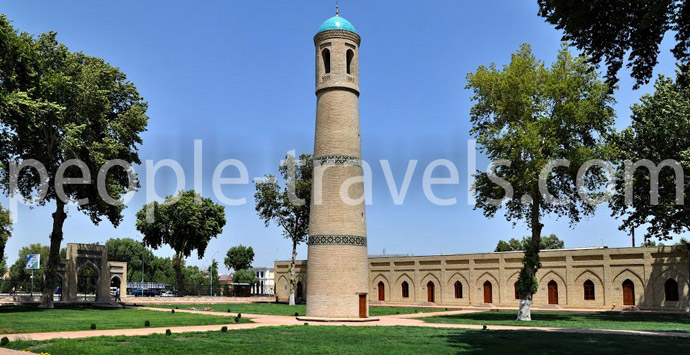 Under its plan Jami Mosque of Kokand was built as the close premise with iwan (arched premises), taking the place of three sides. In the middle of the mosque there is khanaka (religious dwelling place).

Ninety eight pillars from the firm type of elm, which is called “stony tree” prop the arch of the iwan. Ten pillars are inside khanaka. They all are covered with beautiful carving, crowned with stalactitic caps and founded on the marble bases. The main facade of Jami Mosque, length of which is about 100 meters, directs to the East. The facade is extracted with colonnade and trimmed with the decorative cornice, which is slightly raised above the central entry, forming so called kaiwan. By contrast with the simple brickwork of outer walls the main facade and interior of Jami Mosque are richly adorned. 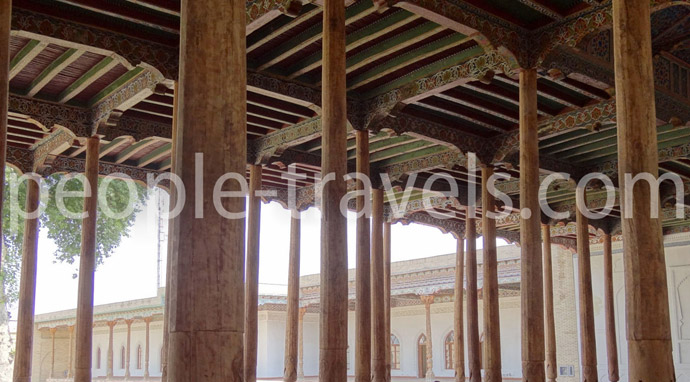 The walls of Jami Mosque are decorated with right-angled and lancet panels from carving gunch, the wainscots are dressed with ornaments in traditional Kokand technique
“chaspak” (mosaic from coloured gunch).

Under Jami Mosque in Kokand there was madrasah – spiritual educational institution. Around the periphery of the garth there were classrooms – khujras, in which students learned subtlety of Islam.

In front of Jami Mosque there is the minaret from baked brick with very smooth annular brickwork. The faceted dome is crowned with six-arched light. The height of the dome reaches 22 meters.

From the top point of the minaret persons interested can observe Kokand city. It is said, offenders and false wives were thrown down from the top. 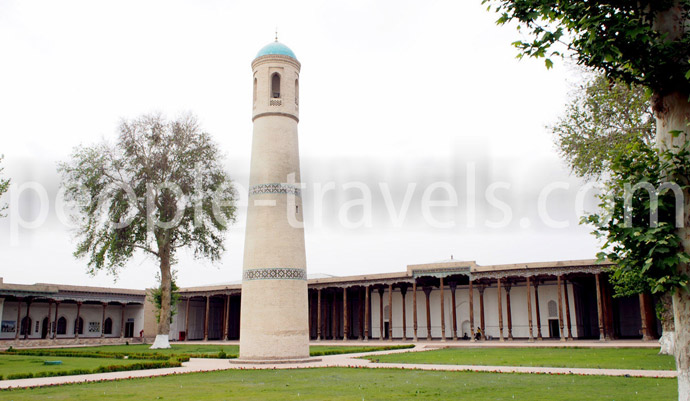 Every day for five times at the same hour all citizens of Kokand are called for namaz from the top of this minaret.

After annexation of the Kokand khanate to Russia in 1905 the refurbishment of Jami Mosque was made. The local rich merchant Mir Khabib-bay allocated means for this charitable affair. Armenian stonemasons were invited, and other masters came from all places of the Fergana Valley.

In Soviet time the madrasah was taken to bricks, Jami Mosque was closed, and the main front was backfilled. Only in 1982 the mosque was wholly renovated. And that is most importantly, the unique ornamental painting of the iwan and interior was refreshed in former view.

Today Jami Mosque is given back to the faithful, and as in olden times the town dwellers come here for praying on Fridays.

According to one existing legend of local dwellers, logs for the pillars, propping the overhead cover of iwan, were sent by the eminent poetess Zebinisso, who was the great granddaughter of Babur and lived in India.

Also it is said, that before laying the first brick of Jami Mosque, that according to tradition should be done by the most pious and God-fearing man, Umarkhan three times appealed to gathered people and asked if there was a man who did not sin during the life. And so far as nobody answered him, he took himself for the most sinless and laid the first stone of the mosque. After this Umarkhan became famous as “Jannat makon”, that is translated as “favourite of the gods”.

Peopletravel Company offers to visit Jami Mosque in Kokand with our professional guides and know much cognitive information about Kokand city in general.