Bibi-Buvaida mausoleum is a lady's tomb where buried mother and wife of Shokhi Jalil. It is located 20 km from Kokand and was constructed in 1823. Although the mausoleum of a mother and son are located in various cemeteries, despite the considerable distance separating them, they built on the same axis - from one another mausoleum is visible.

This occurrence relates the local population with the tradition, which says that Bibi Buvaida loved her son and willed that their graves should be visible to each other. Architects, fulfilling this wish, had chosen such platforms, where one area is visible to another.

The shrine is a holistic, unified architectural composition body. Rectangular building with the dimensions of 18 x 8 meters combines two square rooms, covered with a dome. The main entrance is highlighted by the portal. Arched niches built on the axes and relied upon by the dome, helped to reduce the diameter of the overlapping construction of 1.5 meters. 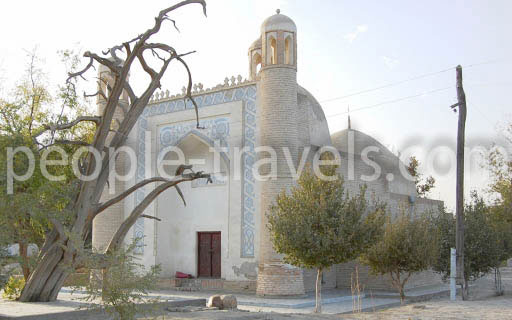 Usually such mausoleums outperform gurhona area, but in the last two tombs we see the opposite phenomenon. On the eastern side of the ziaratkhana was attached a small camera to the burial granddaughter Bibi Buvaida covered by arches, erected by building arches from the corners to the center. Code of this design is called Rumi.

Here remained fragments through the arched galleries and doors are decorated with shallow carved geometrical ornamentation while bare masonry walls inside are covered with facades ganch. Memorial attracts attention with solid form, architectural simplicity and clarity of ideas. 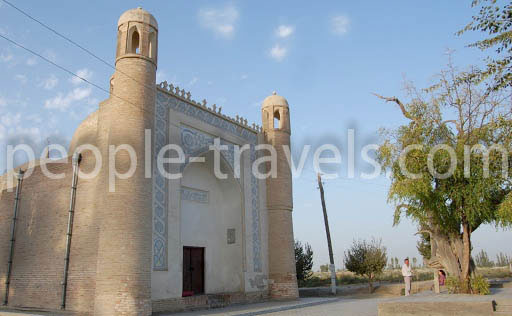 Monumental portal with two cylindrical towers (guldasta) on the sides highlights the entrance oriented to the east. Rectangular building rose of brick, has two cameras, covered with domes: tomb tombstone with lancet (Sagan) and memorial mosque.