The Mystery Of Medieval City

This ancient city is just one of the locations on the legendary Silk Road. From here the camel caravans followed on the desert often up to seven days to get to Kokand. Today it is possible to overcome the distance by train in just a few hours.
On the one hand, the city is rich in a variety of retail outlets, enchanting shops and also the big bazaars with the aroma of spices, beautiful fabrics and the most delicious cuisine.

The spirit and the cultural aura of Kokand formed over the centuries.
Here, on the Silk Road, it was the most important point of intersection of cultures and mutual enrichment of the East and West. The ancestors of this land communicated with merchants, travelers and itinerant scholars, poets and thinkers from various countries over the centuries, cognizing the wisdom and exploring new verges of our life. Discover it with matchless travel to Uzbekistan with your best guide to oriental pearl.

Under the influence of Islamic culture the importance of art acquired in courteous communication and behavior in the social life of Kokand people. There are many subtle interaction codes, which were required to master the appropriate education, training and the environment. Nurtured for centuries outlook and social skills have become an important part of the culture and the modern generation. 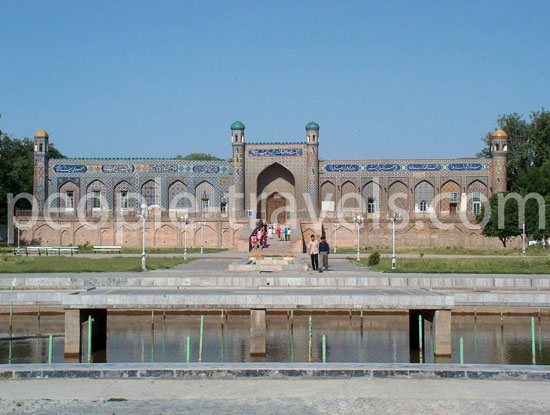 Pages of history. At the crossroads of Medieval

Kokand was also the largest trading center on the Silk Road, known for its numerous caravanserais, where merchants stayed on camels laden with goods.

History says that Russian merchants brought utensils and textiles, the traders from India - tea and skin, and silk comes from China. Trade was carried out on the covered bazaars. Despite the relentless scorching sun, shopping arcade with overlaps protect merchants from the heat.

Kokand is really rich in tourist attractions, the cause of which was the fact that it was the capital of a medieval Kokand Khanate.

You could not take your eyes off from the patterns of green and turquoise tiles on the facade of the mosques of Kokand. It ends with the splendor of Eastern architecture domes, which reach heights of forty meters. These mosques are some of the most beautiful architectural structures in the Islamic world. And they were built in the Middle Ages the rule of Tamerlane.

Read more about sightseeing in Kokand