Inscriptions on marble panels and plates are one of the unique features of architectural and memorial epigraphy and medieval Khiva.

It is most often grandiloquent texts devoted to the construction of any buildings, they are similar in genre to the epitaph poems with philosophical content, and even copies of documents and proclamations. All they once adorned the walls of all sorts of constructions of Khiva and therefore are part of the architectural epigraphy of the city and its surroundings.

This is also a unique view of the texts that have made remarkable polyphony in architectural epigraphy Khorezm by variety of styles and genres of texts. 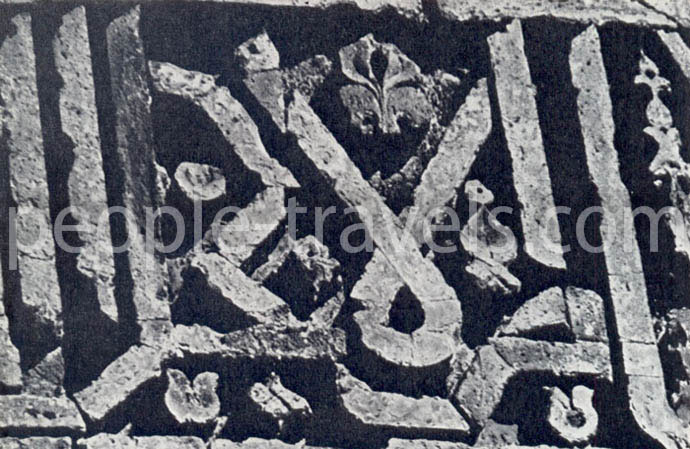 The monuments create extensive and creative space of the city by volume and color of architectural compositions, which conceived and formed a state. The inscription in this spatial composition plays a special role. Through writing state officials proclaimed their right to this place, but "creative right" remained for architects, interior designers and calligraphers.

On the other hand, this is the space that distinguishes the city (urban culture) from neighboring steppe that creates tangible benefit for the city as a center of power, religious, ideological proclamations, epigraphy which was in the first place.

However, the inscription it is part of patterns and therefore as part of the image of the monument it creates a mood of awe, a sense of contact with the divine beauty, especially if the inscription is located on the exterior and interior of the mosque, on the graves of the saints.

Such places is a sacred space, to which the donators treated separately, and in which the master tried to show the utmost of his skill, fueled reverence to the Holy Spirit. In these cases, the philosophy of writing (as well as monuments to which it is applied) is manifested in more complex contexts, moving the visitor from the world of the profane to the sacred world.

Naturally, this kind of interpretation of the multiple functions of epigraphy can be abstract, if not fully understand and accept the inscription itself, or not familiar with the most authoritative statement of its translations.