The name of Uch Avlioli mavsoleum means "mausoleum of three saints" and it is located in ancient city of Khiva. Place of construction that refers to the 18th century was the suburban cemetery existed until the 20th century. The current location of the mausoleum is the rear courtyard of the palace Tash Hawley.

Wide hall of the mausoleum has arch-dome-shaped roof with stalactites as a decoration. Names of the masters who built and redecorated building engraved above the entrance to the mausoleum.

This historical monument of Khiva is located near the western walls of Tash Hawley and was erected in memory of the three saints. Large hall of the mausoleum is covered by a dome with a cell vault. The mausoleum has many graves, the earliest date - in 1561; it can be seen carved on the panel door. Master's name is also written on the carved front door - Abdullah Ibn Said. Judging by the inscriptions, the mausoleum was renovated in 1821- 1822 in the early 1980s, the entrance portal was damaged by heavy rain; in addition, columns have been strongly spoiled. After the restoration and reconstruction of the adjacent territory, the mausoleum became frequently visited place. 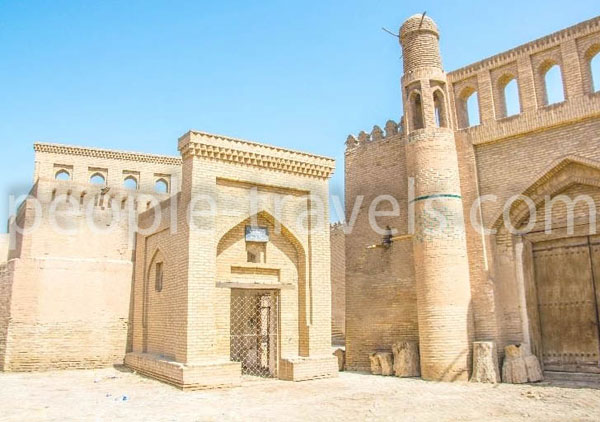 Small floral patterns of mausoleum appear very realistic. Their shape reminds patterns caused during the period for household items. Flowers used on majolica dakhma patterns; fine lines inside the large forms, all of them together create a colorful and attractive picture. On the background of diversity openwork ornament differ inscriptions written with white paint on small surfaces small Sagana.

In other words, four corner walls are highlighted with small arches, and in the corners of the main square - with small niches. Somewhere in the upper frame arches preserved beautiful patterned terracotta inserts with smooth ornament. In the corner one of the niches is covered with pictures of Khan satin small marble headstone. Here is also a memorial mosque attached to the left wing of the mausoleum with carved wooden iwan - the building of modern construction.