Tort Shaffaz madrasah is situated in the outer city of Khiva – fortress Dishan Kala. Madrasah erection was initiated in 1875 and was fully finished ten years later, during the reign of Mukhammad Rakhim Khan.

Earlier in XYIII-XIX century it was the iconic memorial complex. These monuments were arranged near a square pond, the perimeter of which grew trees.

The main part of the complex is a mosque, which looks like a four- columned domed building. From the front face aivans columns are decorated with exquisite carvings. Next to the mosque is a small minaret. Three ruined madrasah, comprising a set of Tort Shaffaz with sealed entrance is used now as cemeteries and as Mazar - mausoleum. 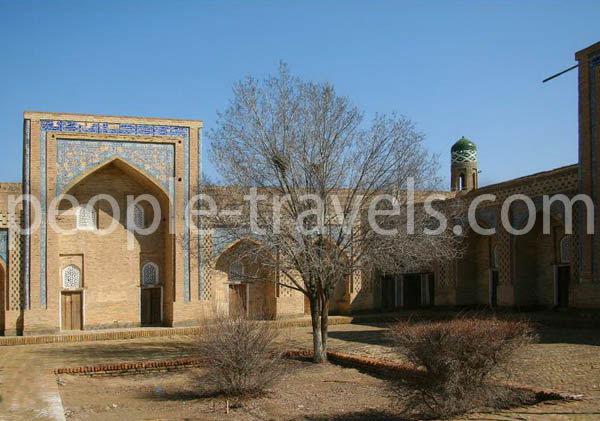 Here were buried famous Khiva poets of XIX century - Yafandiyar I and his three military commanders. In this regard, the people and called this series "Tort Shaffaz ", which translated from the Uzbek language means "Four warrior."

Madrasah includes two courtyards. Entrance from the street leads to the courtyard, enclosed a blank wall outside, but inside is surrounded by one-story hudjras (kelya). Courtyard dominated by the main building that consists of a high portal of the main facade. The facade is covered predominantly blue and white majolica.

In madrasah were darshanas (classrooms), a rich library, winter and summer mosque. Internal yard consists of 76 arched hujras. Khujdras of madrasah closed domes "Balkhi" and except for the living room have compartments for household needs.