The mausoleum of Sheikh Syed Alauddin in Khiva 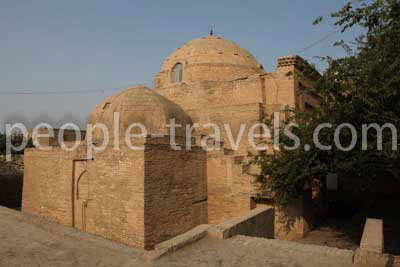 Shrine Mausoleum with a great majolica tomb attracts visitors from all countries. Contrast of the modest mausoleum attire and bright ink tombs is so high that it seems tombstone brought here from another location.

Center of ceramic production at that time was Old Urgench - the capital of Khorezm. Hence the techniques and designs of architectural ceramics were exported not only to the cities of Khorezm, but also far beyond it. Undoubtedly, and tombstone Sayyid Alauddin, similar to overall style tomb mausoleum Najmiddin Kubro in Urgench, could be carried out by Kunya Urgench masters.

The beauty of patterns, composition and tone painting, transparent glaze introduces this ceramic decoration to the best examples of majolica cladding art of 14th century.