In southern part of modern Khorezm region of Uzbekistan between the Karakum Desert and Kyzlkum, there is one of the most remarkable cities of Central Asia - Khiva. It is unique, the only fully preserved in the region, city monument.

Here you will find Sheikh Mukhtar Ata Mosque (1810-1838 gg.), located near the northern part of the cult of the mausoleum of Pahlavan Mahmoud legendary architectural reserve of Khiva "Ichan -Kala.

It was built in 1810-1838 years in memory of Sheikh - Mukhtar Ata. The mosque consists of winter premises taharat Khan - room for washing corpses, and the high summer unilinear aivan. As well as many other landmarks immutable Khiva, it was restored in 1997 to the 2500th anniversary of the city of Khiva.

Elongated rectangle Ichan - Kala fortress walls which stand upon a steep earthen rampart and tower over the city outside Dishan-Kala 3-6 meters instead of a myriad of mud houses with flat roofs, a maze of narrow, crooked streets, burning in the sun skufia domes towers and minarets, madrasahs and majestic palaces and mosques. 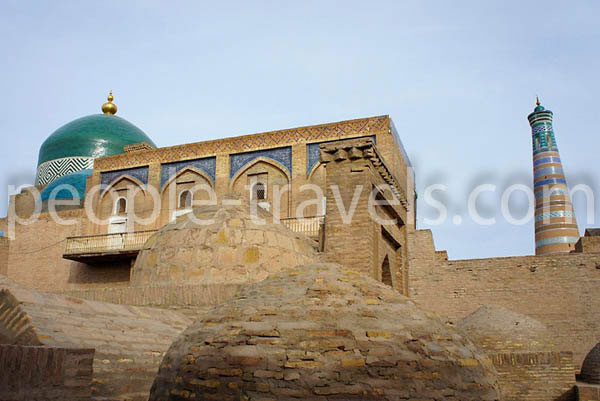 The structure of the mausoleum bit tatty. Here are angular stalactites with large octagonal dome in the form of ancient Khiva skullcaps that look very simplistic. But because of this famous mausoleum incomparable, the beauty of the tomb, which is due to the large difference between the very simple form of the mausoleum and the diversity of its decoration and elegance seem brought from other places.

Dakhma proportioned and decorated like a monumental building. Base executed in the form of a stepwise elevation in the corners decorated with miniature speakers, front part dakhma covered with glazed majolica tiles. Walls have fine painted floral ornaments inside which are patterned panels. Dakhma verge of elegant borders and panels installed on two miniatures Dakhma Sagana (tombstones) decorated floral ornaments.

In 1825, it was completely renovated, arched wings were folded portal destroyed again in a slightly abridged form. Niches inside the building were laid, the floor in the room is laid out Khiva square bricks and walls plastered ganch. On top of the walls with ink derived 14 lines of poetry in Arabic script in Farsi.