This mausoleum of Khiva is located 500 meters west of Dishan-Kala. In the XVIII century mausoleum formed around the cemetery. People associate this place with the name of Hazrat Ali, son of prophet. In fact, the first were buried here Khorezmshakh brave warriors.

Shahimardan mausoleum is a central part of the memorial complex, which includes madrasah (late XIX century), minaret and karihona (1908). There is also a mahram and Tosa Shahsufar mahram madrasah and the mausoleum where family members are buried. 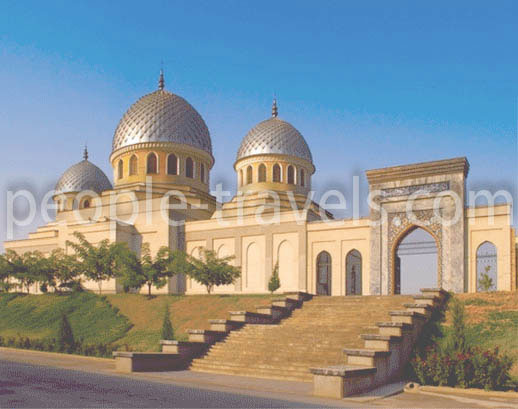 Khiva has minarets in lot of different kinds. Towering over the landscape of the city, they create it with nothing comparable shape. Minarets were conceived as a platform from which to call the faithful to prayer, lost their intended purpose. Their main function was to build the prestige of the city or a specific person, ordered the construction of one or another minaret.

It is not too bright decorated, with green belts with glazed bricks. It is unknown why the builders decided to move away from traditional forms of the minaret. Perhaps this is due to the fact that in the late architecture of Khiva began to actively penetrate the European trends.

Minaret of the complex was erected between the madrasah with the same name and a mosque located on the territory of Pahlavan Mahmud collective farm. This minaret is the smallest in Khiva, decorated with green "fold." Dimensions of minaret reach the height of 5 m; and base diameter of 1.5 m