The sacred place of Khiva

This complex was built in the XIX century in Khiva and comprises a traditional architecture of madrasah of that time. It is next to the burial of Sheikh Qalandar Bobo.

The complex includes a mausoleum, minaret and madrasah. This unique architectural monument is represented as a three-chamber tomb, from which unfortunately remained only domed building with a portal. These buildings are considered as one of the most visited places of Khiva.

Madrasah was built in traditional style and has a number of hujras (living rooms) around the perimeter of the courtyard, corner rooms, and classroom. 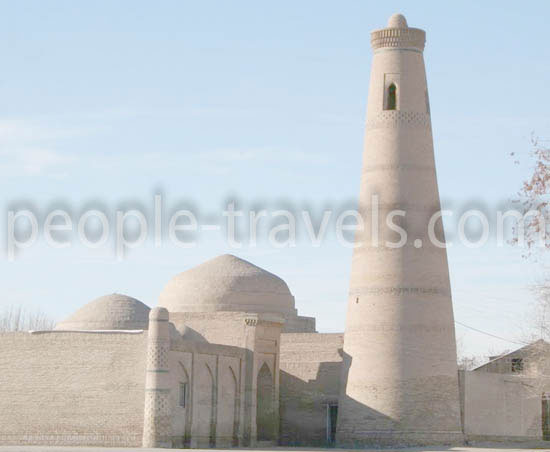 The height of minaret that is located at the outlet of the madrasah is 18 meters. Wide of the base reaches up to 6 meters.

According to legend, Qalandar Bobo was a Sufi, who arrived in Khiva with two brothers in search of faith - dervishes. In those days, the Sufi was very popular among the people.

They remained here, apparently willing to be a part of their favorite city. The city and the people whom he taught Sufism thanked him and built in his honor this lovely complex - the mausoleum of Shah - Qalandar Bobo.

Mausoleum was built in the center of the cemetery that bears the same name and is located to the southwest of Bikanzhan Bika madrasah. 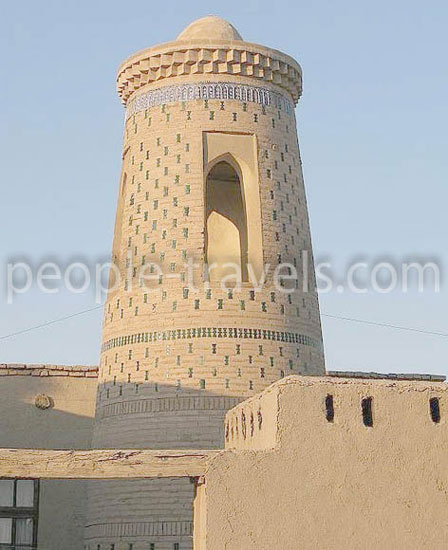 The complex was renovated in 1997, and now has a domed tomb and portal. There was a three-chamber mausoleum of the 16th century with two tombs; he preserved a memorial of domed building with a portal. Along the perimeter of the madrasah courtyard located crib residential hujras, domed mosque halls and classrooms. At the portal of the main facade of the madrasah there are numerous compositions with medieval majolica that composes inscriptions form Quran.