The majority of minarets are located in Khiva. The striking panorama of Ichan Kala captures four main minarets. Among them there is Sayid bai Minaret. This spectacular cityscape demands admiration as the minarets tower skywards. Built in 1855 this minaret is another widely known monument of ancient Khiva.

It is notable for its dimensions and the shining beauty of the blue, exterior glaze. Originally intended to one of the tallest minaret for the entire state it left unfinished. During the middle of the 19th century, Muhammad Amin khan possessed with vanity, commissioned this minaret and an adjacent madrasah.

The structure was not completed at the time of the ruler’s death. So the project ended prematurely. The internal steep spiral staircase is accessible to tourists who enjoy clambering to the top of the 175 steps for the captivating view. The exterior of this minaret is also worth study. The pillar is laid with glistering enameled, polished tiles creating a superb interplay of light and color. 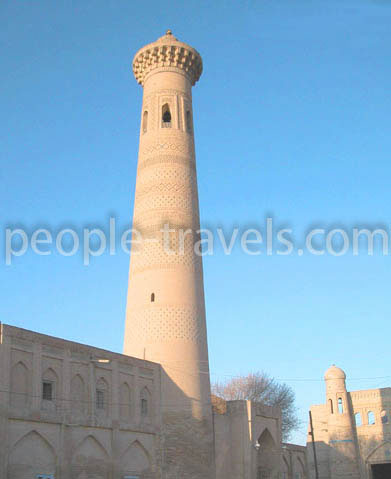 The pillars are decorated with ten bands of enameled, lacy brickwork conforming to the traditional pattern. From its circumference of 6 metres at the top, it widens to a circumference of 9 metres at ground level. The foundation of the minaret extends many metres underground within age-old archeological deposit.

The 16-vaulted lantern rotunda, supported by prominent rows of brickwork in the form of stalactite cornices, hangs over the minaret trunk. A traditional, steep staircase leads to the top. Four muezzins used to climb up every Friday in old times to proclaim a holy prayer (azan) to all four directions of the world.

The minaret trunk is decorated with the bands of figured brickwork, carved terracotta tiles, Kufic and divani inscriptions and geometric ornaments alternating with smooth, finished tiles.

We recommend you to visit this unique monument of medieval Asia.