Said Muhammad Mahir mausoleum is located in Khiva and valued as a family tomb of Khiva khans. Saeed Muhammad Khan, Muhammad Rahim Khan II (Feruz) and his grandson Temur Gazi Tour were buried here. In mausoleum there are graves of the descendants of Khiva khans, their wives and children.

Three years of restoration work helped to reconstruct the building that was destroyed by time. In this work of restorers added new puzzles of decoration. During excavation of the graves here has been found several people that were buried from without proper rites. Perhaps these people were the first preachers of Islam in these areas. Scientists are at odds, and on the date of erection of the individual elements of the complex. They have proved that the construction was carried out in two stages. The oldest part of the complex is mausoleum and it is the oldest surviving religious building in Central Asia.

Residents of the village, near the mausoleum, firmly believe in the magical properties of the shrine. For example, if a person is bitten by a dog, it is necessary here to change into new clothes to protect yourself in the future from such afflictions. 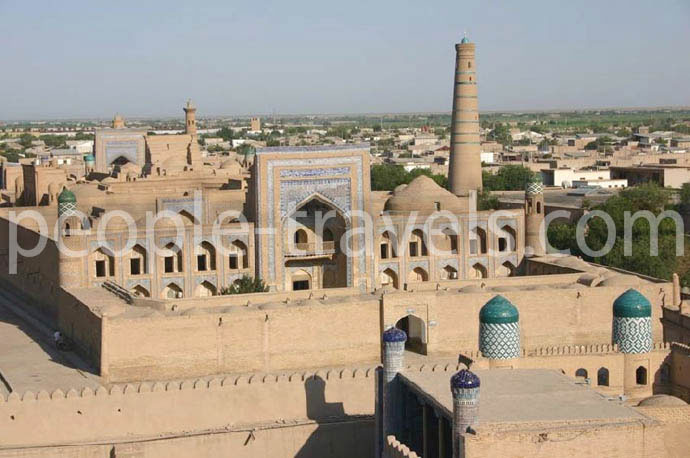 The inner side is decorated with an elegant multi-colored ornament of Gancia. Although for the decoration of the mausoleum builders used inexpensive building material. The building has a long staircase leads, pilgrims preparing for a meeting with the wisdom of the ages.

The main facade is covered with mosaics and sides decorated with turrets guldasta that gives the impression of monumentality. The side facades are embellished with arched entrances. The portal of the building has a non-traditional elongated shape. Thanks to its location, as well as the presence of a large hall with good acoustics, it was the center of cultural life of Khiva for many centuries.

This incomparable complex keeps the mystery of a long history of our country continuing to recreate images of Medieval.

Every year, this complex is visited by more and more pilgrims, tourists and scientists. Take an opportunity to visit it during Uzbekistan tours offered by our company.