The complex of the last Khiva’s khan

Said Muhammad Khan Madrasah is located in a picturesque place next to Sirchali Dishan-Kala complex in Khiva. It was erected after the death of Muhammad Khan of Khiva, by the order of his son Said Muhammad Rahim Khan II in memory of his father in 1864.

Muhammad Khan was the 10th ruler of the Uzbek Kungrad dynasty of the Khiva Khanate, who reined in 1856-1864. It was the son of the ruler of Khiva Muhammad Amin Khan, who in 1855 was killed in a battle near Serakhs. In 1856, to the power of the Khanate came the son of Muhammad Rahim Khan I - Said Muhammad Khan II (1856-1864), who prevent the attacks of nomadic tribes.

Under the reign of this Khan maintains diplomatic relations with Russia, the Ottoman Empire, Iran and Afghanistan. And also this ruler paid attention to the numerous architectural complexes as Said Muhammad Khan Madrasah. Here in Khiva was developed unique pictures of art and design of madrasah and mosques. 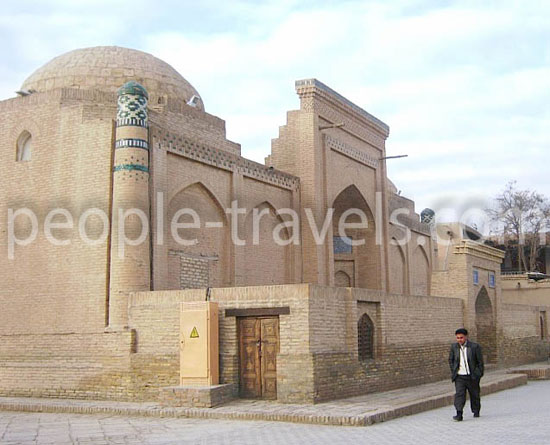 Here every visitor could came to know the truly Medieval age of this ancient city that transmitted with the architectural heritage and art styles of masters and craftsmen from all Central Asian countries.

Brick rings, built in the chain linking the madrasah, recalling the famous series "Sasanian pearls" that are famous for drilled beads, cut stucco plaster as pre-Arab palaces of Central Asia and Iran.

Except decorative effect relief surface bricks give a high degree of adhesion to the solution of alabaster, which in combination with the thickness of the walls, reaching 1.8 meters, and provided surprising preservation of the monument.

During the reign of Muhammad Said Khan in Khiva was developing new crafts, as well as science, art and trade.