Suburban residency of the Khan

In Khiva preserved about fifty old madrasas and only few residencies of Khan. They are of great interest among visitors as well as in their architectural composition that clearly traced urban trends prevailing in Khorezm for several centuries. Rural summer residency  Qibla Tosabog was constructed in XIX and now surrounded by garden and flowers.

The external appearance of the chateau and park complex is a wonderful combination of traditional architecture of Khiva, established in the middle Ages, and the new architectural techniques. 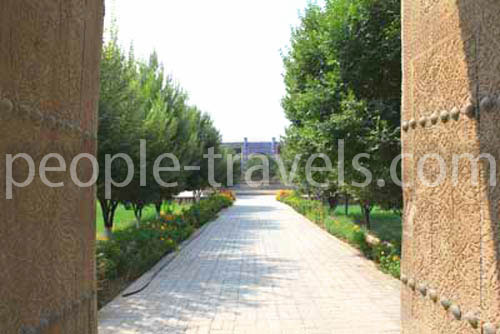 The architecture has developed many centuries ago to protect it against thieves and the scorching sun. In the corners of palace rise four adobe towers, two framed doors, inside the spacious courtyard with an orchard, a vineyard and accommodations.

The Palace Tosabog is surrounded by a high, like a fortress, a wall of pakhsa - clay blocks. Access to the residency is laid through the massive carved gates. Behind the walls, visitors are greeted by green lawns and ancient trees.

In the palace were ceremonial rooms for official receptions, storage and living quarters of the treasury. The facade of a single-storey building of the Qibla Tosabog palace decorated with traditional ayvans and deep balconies with tambourines. 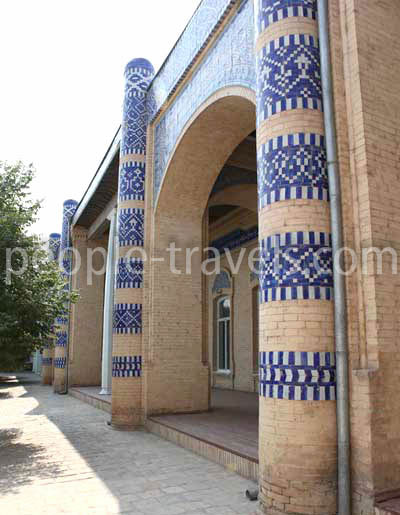 Azure mosaic ornamental belt passes around the perimeter of the palace towers. In the staterooms there is ornamental carving and canvas with chandeliers and fireplaces for heating. This tribute refers to the architectural trend characteristic of Khiva of the late XIX - early XX century that marks the course of an enlightened rapprochement with Western civilization while preserving established traditions.

Qibla Tosabog is green gardens, shade aivans, combined with comfortable living conditions of residency of Khiva’s Khan. In our time here operates a health center where you can not only relax, but also to enjoy the Khorezm dishes - rice, mampar and delicious dish of khan - tuhumhut.