Pottery holds a special place in the history of Uzbekistan and the life of the Uzbek people. Since ancient times, potters occupied the place among the most respected people, and those, who particularly excelled in his work, enjoyed fame far beyond the borders of the motherland.

Pottery centers are considered as Rishton, Gijduvan Shahrisabh, Khiva, Samarkand, and Tashkent. But Khiva’s masters occupy a special place. Uzbek potters not only continue a long tradition, but also develop them, creating a pottery school.

So, pottery Khiva’s masters differ by delicate and complex patterns, color, with a predominantly blue-green, cobalt and turquoise shades.

Masters were well known by the unique style of "Kalami" and decorated their product complies with ornaments: on a dark brown background several layers of green, deep yellow, and blue, as well as patterns of dark red color. 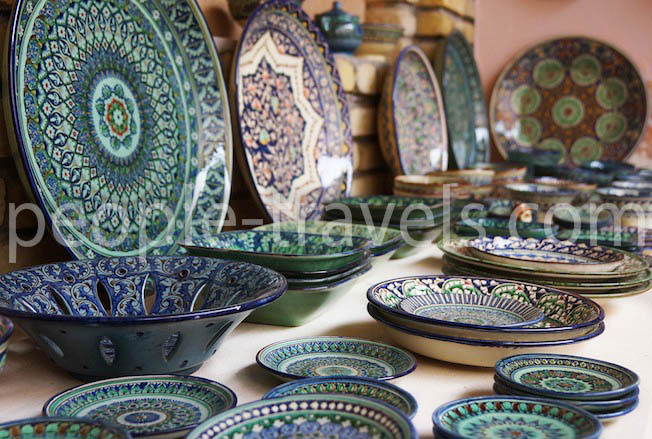 Potters also preferred to paint their wares large ornament with yellow and scarlet color on a dark red. If you see a product similar coloring, but also with coating, it means that the object in front of you is one of the branches of Khiva pottery school.

The potters are also divided into two types: the first adhere to the old type and prefer ornament wave-shaped green, yellow and brown. The second cause small floral pattern on a light background.

But the oldest and largest center of pottery production was Khorezm. Masters of local schools prefer to cover a variety of products geometric and floral ornament dark green, turquoise, white and blue.

A special type of pottery products are considered covered with ornament. The most common multi-colored tiles - they are widely used in the decoration of buildings. More than half of the monuments of architecture can boast well-preserved mosaics and majolica, which even after centuries has remained virtually intact.