Payando mausoleum is located south of the most ancient Khiva - Juma Mosque, multicolumn hypostyle mosque. Its sprawled, covered with a flat roof beam volume could accommodate the entire male population of the city that came here for traditional Muslim Friday's worship.

If you first see Khiva at night, impressions will be awesome. City seems frozen somewhere in the mists of time: clay walls, doors with wood carvings, echoing desert pavements and the complete absence of people. This all presents city as oriental tale. 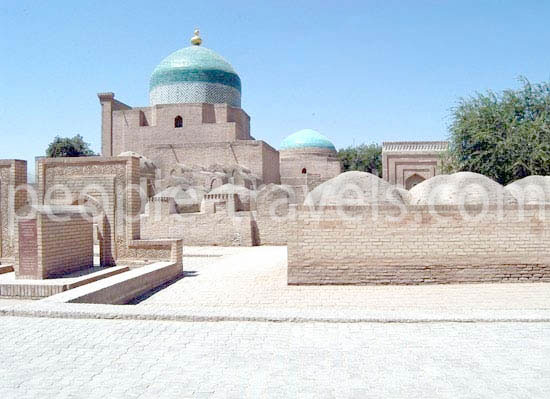 Travelers come to the city to deep into an incredible atmosphere of ancient buildings, numerous flowery streets that randomly fill Khiva. But the impression disorderly structure of the city is wrong. The present shape of Khiva was formed at the turn of 19-20 centuries. It is traditional for the town plain rectangle stretched from north to south and sectioned crosswise axis main streets; these proportions were favorite architects of antiquity.

Small floral patterns appear very realistic. Their shape reminds patterns caused during the period for household items. Flowers used on majolica dakhma patterns; fine lines inside the large forms, all of them together are a colorful and attractive picture.