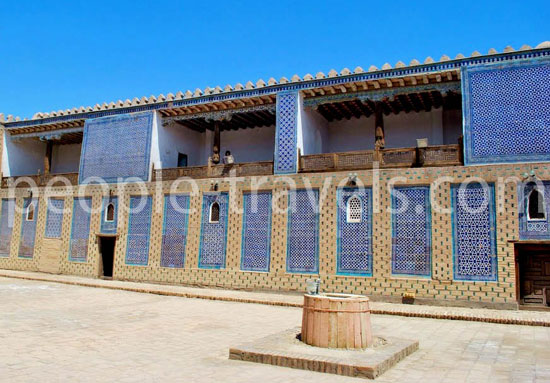 Mehmonhona or reception room is a spacious courtyard with a square shape, having in the center a pedestal, which was used as a location for the yurts of nomads that visited Khan. The rest of the yard - ayvans were built up for guests and they were artfully decorated with traditional majolica.

Next we see the courtroom – Arzhona that is located in the southwestern part of the palace. The decoration is also present here with majolica. In this building worked kazii (judges), who carried the name of the judicial activity of Alla Kuli Khan.

It is worth noting that the judicial system in Central Asia never distinguished impartiality and objectivity. Judges often defended the interests of rich people. However, the court in the palace of the Khan was a model in terms of judicial ethics.

At the other side of the Arzhona was room of concubines that lived here until the happy moment when the elderly Khan will turn his attention to them. On the number of concubines is legendary. They say that some rulers were more than a thousand. Opposite the entrance there is the kitchen and other utility rooms.

The reign of Alla - Kuli Khan was a golden time for Khiva. Power has strengthened its position; brisk trade brought more money to the treasury. In addition, there were no destructive wars or raids. It was glorious period Khan ordered the construction of the palace, which had not yet seen by Khiva land.

As a result, architects spared neither strength, nor gold for the construction, built perhaps the most magnificent palace in Khiva. Because of this, today we can really enjoy the view of the royal apartments.