In 1908 - 1910 years in Khiva was built the Pahlavan Mahmud complex that was one of the most famous monuments of those times. Pahlavan Mahmud put a lot of effort and works on the improvement of the city. Due to his efforts in Khiva were built hospital building, post, telegraph, Kosh - Darwaza Gate, the palace official receptions in the palace complex and new bridges of iron structures in some areas of Khorezm.

The main architect was Khudaybergen ibn Ustad Baba Khwarizmi that decorates the madrassah with beautiful majolica patterns, based on national traditions of ceramics. In the minaret you will find written chronograms consisting of 48 lines. These two chronograms were cut on marble slabs and installed over the front door madrasah, as well as the outer part of the minaret at a height of 10 meters above the ground. 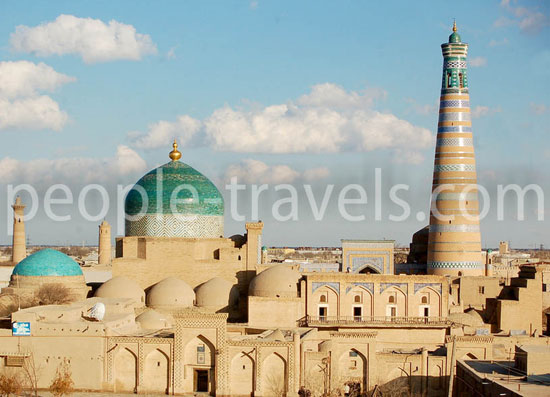 Madrasah consists of 42 hujras where studied and lived 50 students were, the front part of the madrasah built in 2 floors. Right from the entrance to the lobby there is a spacious room - winter dome mosque. External structure and decoration of the main facade of the madrasah associated with a minaret on the architectural plan that is different from other complexes in Khiva.

Side wings are decorating the portal, decker arches and corner towers of guldasta. The upper parts of the arches are adorned with ornaments in the form of individual edges and glazed tiles. Small courtyard surrounded by one-story madrasah cells for students. 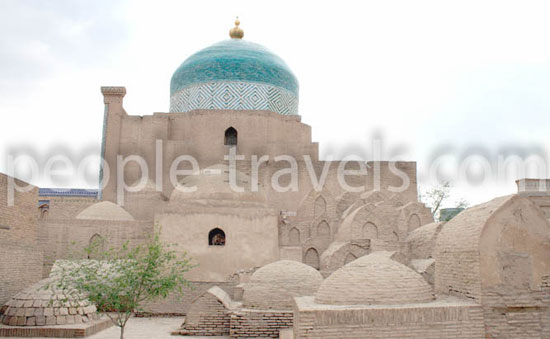 The minaret is located near the madrasah and it was built simultaneously with complex. Minaret of 56 meters has a diameter at the bottom of 9.5 meters. During the construction of the minaret were used architectural techniques and methods of masters architects of the past centuries. The upper part of the minaret thinning to the top ends elegant cornice and roof lights with a finial in the form of a crescent.