The magnificent masterpiece of Khiva

Nurullabay palace was built in 1912 by order of Muhammad Rahimbay II. Construction of the palace lasted for almost 6 years. This architectural complex consists of several courtyards, lush gardens and councils, ceremonial and residential premises. Traditionally, the palace is surrounded by gigantic ramparts length of 650 meters with a protective semi-circular towers - gulbdasta.

In the construction of the palace walls participated the most famous architects, decorated them of glazed brick, deified by a special technique, which did not disclose the master for more than a few thousand years.

History will remember the names of the carvers and painters ganch in the main rooms. Remarkably, the interior of the palace is not made in the traditional style of Khiva. Khivans favored blue, white but here octagonal hall and other rooms are decorated with gilded palace with touches of red and green.

Jewel of architectural complex held official events (meetings of ambassadors, receptions). The fact that the interior of hall differs radically from other rooms: here worked on a par with Khiva masters invited Russian and German artists and decorators. 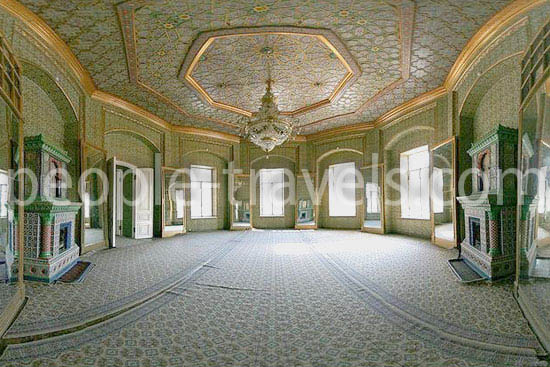 Naturally, they have a highlight in the room design - elements of European modernist style. We can see these places for outlandish fireplaces decorated with tiles, amazing Venetian mirrors and crystal chandeliers. Painting and ceiling moldings were innovation even in Russia at the time.

Perhaps the most imperial attribute rooms were marble fireplace, which was worthy of any royal court. It is decorated with Ionic columns, meander patterns, as well as an iron gate.

Uzbekistan is a country with a rich historical heritage, beautiful architectural ensembles, which are still forced to wonder and admire the tourists from all over the world.