In the eastern part of the main square, near the citadel Kun-Ark there is the Mukhammad Rahim Khan madrasah. It was erected in 1871 and now is considered as one of the largest educational institutions in Khiva. Mukhammad Rahim Khan II went down in history as an enlightened and wise monarch.

During his reign the Power of Art and science was prospering and the governor himself wrote poems under the assumed name Firouz. In the course of their education reform in Khiva opened a number of new schools, which taught not only the spiritual and secular subjects. 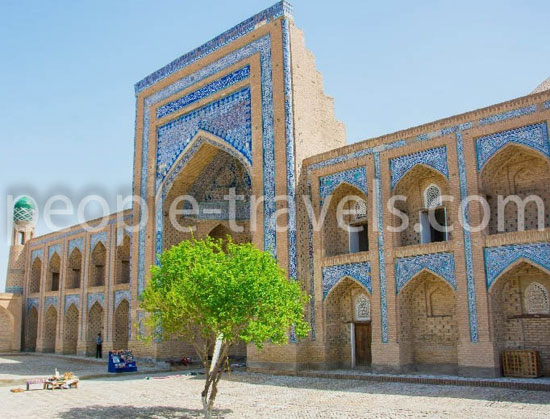 When Mukhammad Rahimhan was building palaces and mosques, but personal pride was the biggest madrasah in Khiva that later took his name. This religious school was built in 1874.

Layout of the building is quite unusual: at the entrance from the street, visitors enter the courtyard, protected by a high wall around the perimeter of it is built in small - kelya hudjras. At the far end of the courtyard is the main building with two floors with a huge entrance portal, which was once decorated with mosaic patterns cerulean.

By the corners of the building adjacent to the tallest tower guldasta topped with small domes on drums with mosaic decorations. Arches and loggias ayvan canopy at the front door decorated with curly brickwork.

The facade is decorated with a rich decor of glazed brick, ornamental carving of doors, majolica striking floral patterns, and the entrance is visible numerous Kufic inscriptions.

On four portals courtyard madrasah written two chronograms as poems composed Khiva poet Mukhammad Riza Agehi and Kamil Khwarizmi. They praised the country by the grace of Khan became well-maintained, its validity has spread worldwide that scientists received a degree achieved their goals, the Khan providing care and enlightened scientists (people) won the title of patron of knowledge and science.