This madrasah is located in Khiva and was erected by the order of Rahim Kuli Khan’s son in 1905.

Entrance to madrasah is laid in the south wall through the dome gallery with a large archway courtyard. Every visitor is bewitched by the unique majolica and green glazed bricks that are the main decoration of the entrance portal.

Rahim Kuli Khan had a son named Isa Tyurya, he was hokim (ruler) of Tashauz city (now in Turkmenistan). He built madrasah near Pahlavan Mahmud mausoleum and gave it the name of Mazar Sharif. 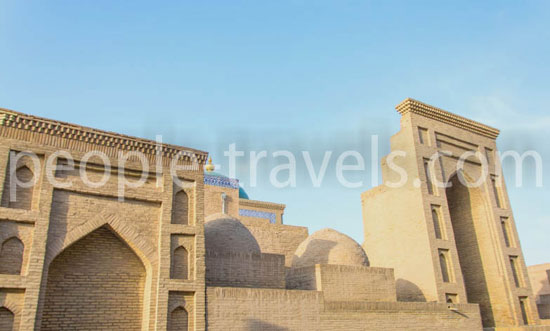 The translation of this name came from Persian language and means "Tomb of Noble people. This madrasah has a legend that kept in the local people. They say that Isa Tyurya had a pilgrimage to Mecca, and got sick in Istanbul.

Upon returning to Khiva, he told about the incident to Khan. Rahim Kuli Khan said that pilgrimage need to endure hardships of the way. It took some time and Isa Khan had gone again to a pilgrimage to Mecca. Returning he got sick again, but in the city of Mazar Shaif (city in northern Afghanistan). Arriving after recovery to Khiva, he built in honor of this city small madrasah, called "Mazar Sharif.

At the most ancient columns are plotted patterns in the form of large leaves, the upper part of the trunk with constant faces in the middle of them, framed by a circle painted ancient Arabic Kufic inscriptions. Threaded this style, we can see on the wooden tiles, installed next to the mihrab, and casement doors.

All this makes the monument even more attractive, and we recommend visiting this unique architectural object of medieval times.