Mamad Maram complex is located in Khiva and was constructed in 1903 by one of the most influential officials Mukhammad Rahim Khan. Madrasah and mosque comprise typical complex that are constructed out of brick. The area around the mosque rebuilt with a spacious yard with a wooden ayvans columns.

Here is a domed hall with built- in single-line iwan mosque. Ceilings of mosques also closed flat roof of the beams. Mosque where three sides are surrounded by prayer hall iwan - this Ak- mosque, located near the gates Palvan darvaza Ichon-Qala. 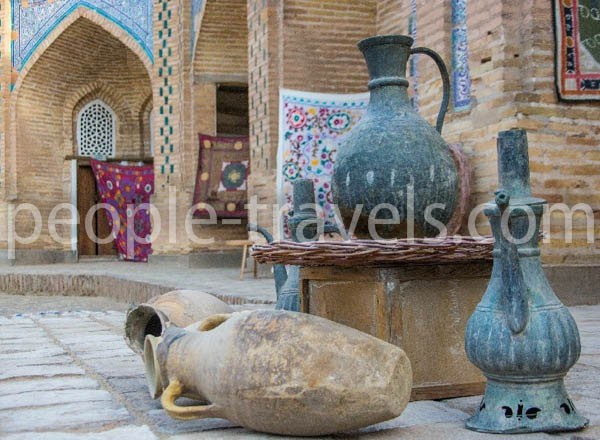 The madrasahs were traditionally decorated with multicolored majolica and terracotta mosaic forming geometric and floral designs and calligraphic inscriptions. Huge mosaic above the entrance arch reflects stylized starry sky combined five-and ten-pointed stars. Restoration work revived many almost completely lost liner and thoroughly reinforced construction of the monument. In particular were straightened tilt southeast and northeast minarets, excavated the lower parts of the southern and western facades with marble plinth, hundreds of years hiding under a layer of earth.

Outside madrasah decorated rather prosaic, but inside has a rich decoration. Mosaic and majolica, beautiful dome migratory corridors impressive unique aesthetics east. Inside madrasah closely set around 16 hujras (rooms, cells) were not overlooking the courtyard. Once khujdras students were given free madrasah adventurous dispose of them, selling to third parties.

About Khiva can talk endlessly, too picturesque and throughout its historical path. And coming here, with all your senses can feel the spirit of the times, has not left the old streets and squares of the city.