Madrasah was built on the order of scribe (Mirza) and close person Muhammad Khan of Khiva Rahimkhan II and his Vizier Islam Khoja Makhdoom Talib in 1910 on the territory adjacent to the north madrasah Islam Khoja.

"Makhdoom" (translated from Arabic means - the person who is served) is a pseudonym, which was given by peers (spiritual masters) and ustaz (teachers).

In Makhdoom Talib Madrasah mainly prepared scribes and calligraphers, here also studied the secular sciences. Madrasah was built by Khiva masters Khudaibergenov Haji and Qalandar Kochum. Their structure is in the quadrilateral form (18,8 x 16,5 meters), around a courtyard located khujdra and madrasah of the same form. 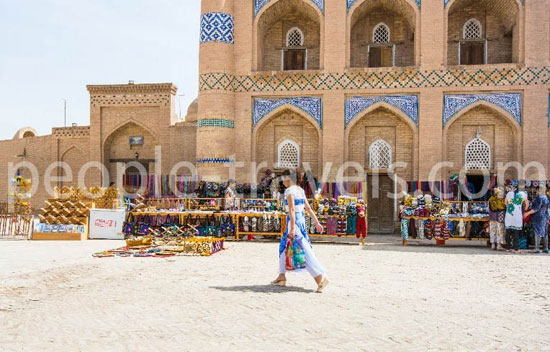 On the upper part of the portal low in two rows laid bricks glazed green tones. Through a small dome mionsaray (darvazahana) is a passage to the courtyard. Darshana (audience) and a mosque are located on both sides of main building.

Khujdras surrounding courtyard madrasah covered arches "Balkhi", Front hujras framed shallow arches. Entering in through the doors you will see that khujdras were established under these arches.

Mikhrab arched niche is painted green paint, partitions painted in black and red colors with the image of trees, shrubs, wild rose and iris, which are formed in the late XVIII and early XX centuries. On marble slabs there are carved inscriptions dated 1203 according to Hijra year (1788-1789 years) written charter drawn up in connection with the donation of the property and funds of the mosque.

In the inscriptions reported that on the behest of the vizier Abdurahman (mihtar) in 1203 Hijra the village Kuyuktam ( Goktam - is now a village in the district of Khorezm region) was allocated to the Makhdoom Talib Madrasah and the income from these lands should be spent for charitable purposes.

In the premises located the corners of the yard you will see enchanting carved doors repeating incredible heritage of Uzbek traditions, made by best masters of Central Asia. In Makhdoom Talib Madrasah in 1977 and 2006 were carried out restoration work.