Depicting the events of the past Kutlug Murad complex was constructed by the order of Abulgazi Rahimhanom Mohammed in Khiva. It is a historical palace with a large dome that inactivated by Kutlug Murad khan in 1812.

The inscriptions on carved doors of the madrassa refer to the 1814-1816. The complex was built in two floors; it has 81 hujra for students and comfortable darshana (training room), mosque and madrasah located near the yard named as sardaby (reservoirs). The main part of the city's population (Ichan-Kala) was taking water to drink out of the underground reservoir in the past centuries.

Architects who built the madrasah made it more streamlined in its structure, they are not included in the madrasah summer aivans, as well as two large rooms on the wings of the portal. Instead they treated the erection of conventional cells. Khiva masters introduced innovation in the old plan that is decorated portals with unique patterns.

Inside the eastern portal of the summer mosque and madrasah built over which at the height of the second floor wooden Balakhany posted. Northern and southern elements of innovation lurking in their composition are wider than the western and eastern. Masters in this way tried to give the court an incredible and picturesque view. 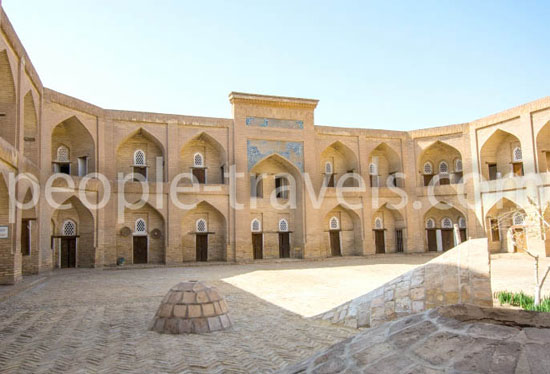 The building is distinguished from madrasah built in Khiva in previous centuries, resembling a fortress its facade has quite a luxurious look. This result was achieved thanks to a device on the portal pentagonal arches and niches in Bukhara and by increasing the number of different ornaments.

Surface around the arches bordered diverse majolica, the same majolica decorated and corner towers madrasah examples of art ganch within the portal gives it a beautiful view.