Few people know one of the oldest madrasah in Khiva - Khoja Berdibai Madrasah, built on the initiative of rich and respected people. Today, we can witness the madrasah in almost pristine condition.

Khoja Berdibai Madrasah of Khiva has abundant history. The construction of Khoja Berdibai Madrasah near the eastern gates of Ichan Kala dates to 1688. But in 1834 when Allakuli Khan Madrasah was being built, this madrasah was cardinally realigned. In view of the fact that the foundation of old and new madrasahs was laid on various levels, the city got two educational institutions, resembling the classical eastern bag – khurjum. Over time, the reconstructed madrasah was called in daily use "Khurjum madrasah". 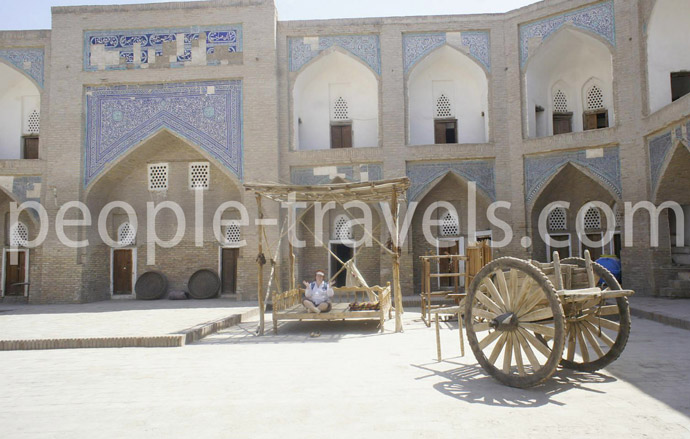 Because of the narrowness of the site, while constructing Allakuli Khan Madrasah, the destruction of the city walls was necessary. South wing of the new madrasah came over the benches of the northern mall Palvan-Darwaza, the northern wing sided with vaults of Allakuli Khan Tim.

In construction Khoja Berdibai Madrasah is one-storied building of baked square brick. The roof of this madrasah is the ground in front of the main portal of Allakuli Khan Madrasah.

Khoja Berdibai Madrasah has 99 cells, class rooms, summer and winter mosques, utility rooms and a library. The building is decorated in the traditional manner of Khorezm of the Middle Ages.

In outward appearance Khoja Berdibai Madrasah is a right-angled building with inner yard. During the functioning of the madrasah in the corners of the yard there were iwans (vaulted room), where teachers and pupils rested in hot time. The central entry to the madrasah is luxuriously decorated with diverse wood cuttings.

The interior decoration of Khoja Berdibai Madrasah is ascetic enough. Only painted wood bars (pandjara) on windows make certain Eastern charm. The class room is directly located at the distant part of the madrasah. It was of small size and had the form of a rectilinear square. The total number of dwellings reached sixteen, which was due to the small size of the institution.