Khiva is a beautiful city that carries every traveler to another world, bewitching with incredible medieval buildings. One of these buildings is Kalta Minar Minaret this is a perfect symbol of this ancient city.

Its size is staggering; the base of this building goes down to fifteen meters with the diameter 14 meters and a height of 30 meters. However the plans of architects to create the tower with the heights two times heigher.

In 1853 the construction of this bewitching minaret stopped, although it should be up to 70 meters, and by some estimates up to 110 meters.

By the architect broad base increased strength and the estimated peak greatly narrowed, without causing strain. And now it has the name "Kalta" which translates as "short."

Kalta Minar Minaret is a brick pillar, round in cross-section. Minaret markedly narrowed to the top, which gives it additional strength and harmony.

This Minaret is crowned with a lantern through an elegant cornice and a small dome with a gold finial. A barrel of the minaret is decorated with fancy blue and white belt made of glazed ceramics, interspersed with figured work of polished bricks. He dominates Khiva, visible from any point of the city, so that tourists get lost in it subtly.

Minaret looks very monumental and here you can add unique glazed patterns that surround it. Best artists of those times involved in the construction and decoration of the building.

And around the minaret there are numerous houses with flat roofs and closed courtyards, a maze of narrow crooked streets, burning in the sun domes, towers of mosques and minarets and winding chain of ancient walls.

Now this historical center of Khiva is a UNESCO World Heritage Site. Until today, there remain more than sixty landmarks. 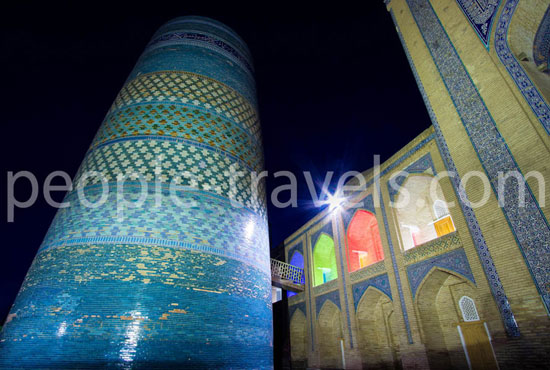