Jewelcrafting is one of the oldest arts, the secrets of which for several centuries, passed down from generation to generation. First jewelry found on the territory of Khoresm, dated XII century BC, when there was no Tashkent or Bukhara or Samarkand.

At a time when Egypt ruled the Pharaohs, and the walls of Troy reliably protected its inhabitants in Central Asia has produced ornaments of bronze, silver and gold. "Oxus treasure" and the treasure found in the mound Dalverzintepe, provide an opportunity to talk about what local people not only know how to make jewelry, but also greatly succeeded. The total weight of jewelry made of precious metals and stones found in Dalverzintepe are 32 kilograms. But the V century BC, the time when Alexander the Great had not yet been born, can be imagine today thanks to museums around the country.

Prior to the arrival of the Arabs in Central Asia, jewelry used not only as a decoration, but as the magical talismans - many precious finds are in the form of amulets depicting gods or totems with animals. 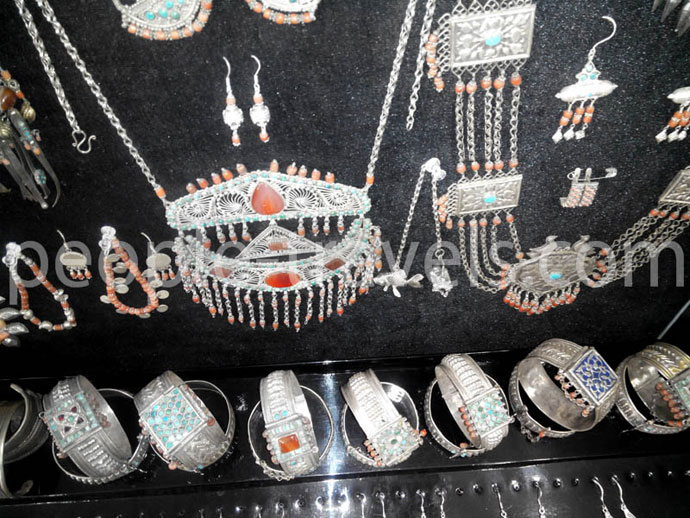 In the Middle Ages in Khoresm were very popular jewelry with stones such as carnelian, turquoise or pearls. It was believed that they bring good luck in battle, improve vision, and confer health.

But the real peak of jewelry Khoresm took place in the XIX-XX century, when jewelers adorned almost everything - from daggers and bridles to cookware and shoes. In the XIX century in Khoresm move masters from other countries - India, Persia, the Caucasus, China, of course, with his vision and his secrets. Over time, in the jewelry business in Khoresm were introduced traditions of other cultures, that he went only benefit.

Unfortunately, at the end of the same XIX century Russian colonizers begin to deliver in Khoresm minted products and local craftsmen cannot compete with cheap and affordable products.

Jewelry making at the time was forgotten, but still secrets passed down from father to son. In the middle of the XX century jewelry traditions began to revive, and by the end of XX and all reached the level of a century ago.