The architectural masterpiece of the Medieval

Khiva is a place of pilgrimage for tourists from around the world. When you are walk along the streets of this ancient city, you could forget that you are in XXI century.

One of the many attractions in Khiva one of the most famous one is Islom Khodja Minaret that considered as the highest minaret in Khiva. This architectural masterpiece was built in the beginning of XX century.

A minaret shape follows the shape of the ancient structures of its kind. Its height reaches 57 meters and exceeds the Kalyan Minaret of Bukhara. Islam Khodja complex was named after the vizier of Khiva Islom Khodja. He served under Muhammad Rahim Khan and his son Esfandiar Khan. And on his initiative was built this architectural ensemble.

Islam Khodja was an educated person and frequently went to St. Petersburg as a diplomat of economic and cultural ties with Russia. On his orders in Khiva was built the school of European type.

He also initiated the construction of a hospital, post, telegraph and ginning plant. He also intended to build the railway.

But these projects did not meet the approval of the clergy and nobility of conservative khan. Against the vizier was a plot, and Islam Khodja was killed on the street at night. His is a history of the great scientist and diplomat of XX century. 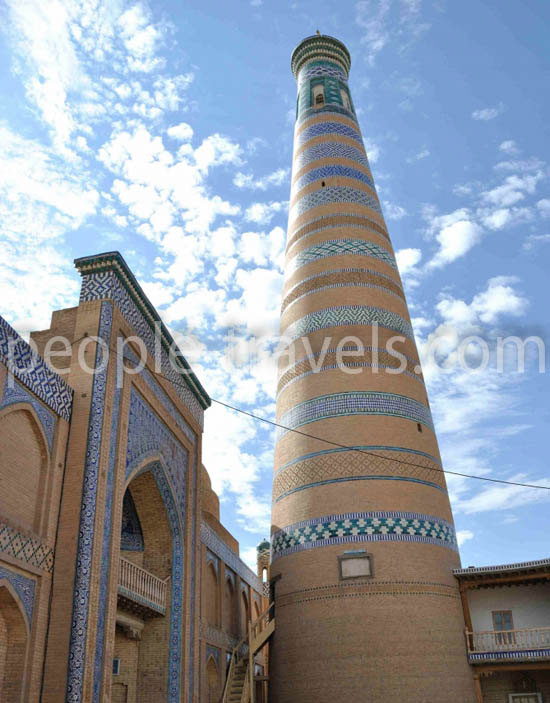 Breathtaking panorama of the eastern city

Special attention deserves the minaret in the complex. With a height of 45 meters, where the upper floor, you can contemplate the Khiva bird's-eye view. Beautiful mosaic ribbon encircled this tower.

Minaret is conical in shape and has a diameter at the base of nine and a half meters. Above it is decorated cornice, ceramic bars and pommel.

Well, for those who want to admire the city from the top of the minaret, will have to overcome one hundred seventy five steep steps of a spiral staircase, and a lifting device only here are the legs.

Do not be surprised if you have to climb at times with his hands on high stone steps. But the reward you will be a breathtaking panorama of the eastern city, a city of a fairy tale, and you will always remain a man who had seen with their own eyes to Khiva, dimly flickering and blurring away in the hot haze of sand ridges. 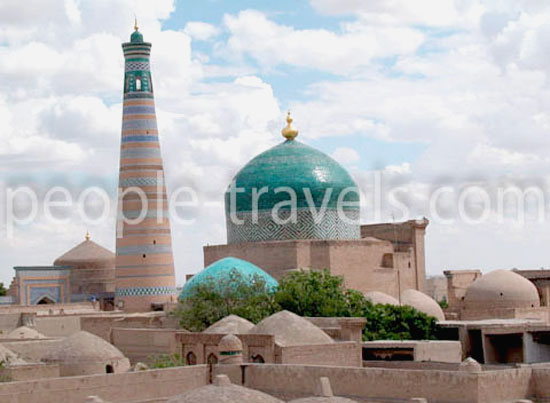