One of the treasures of Ichan Kala, which in 1990 became the first place of interest of Uzbekistan, put on the list of the World Heritage of UNESCO is Islam Khoja Complex. Madrassah and Minaret, composing the complex, are the most recognizable monuments of this old city, its original business card. The erection of Islam Khoja Complex in Khiva underwent from 1908 to 1910.

As for Paris, the main attraction is the Eiffel Tower, or the world famous Big Ben in London, as in ancient Khiva the main symbol is considered to be the Islom Khodja Minaret in Khiva. And it's fully deserved. The height of the minaret reaches 56.6 meters and the diameter of the foundation is 9.5 meters. The geometry of the minaret is tapered upwards, and that is why it seems to be even higher. This effect is enhanced with horizontal belts of glazed cladding. 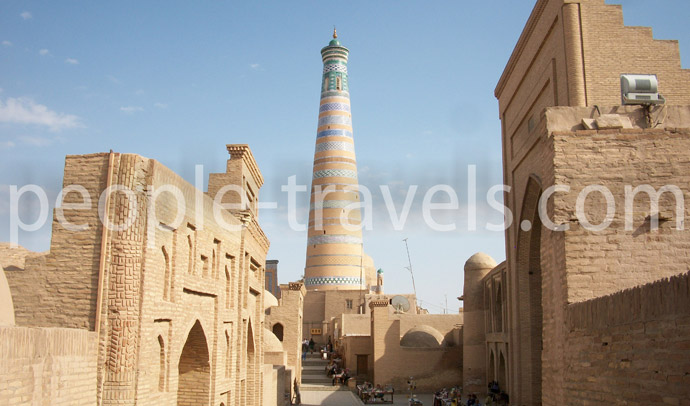 2,5-meters dome roofing on the top of the minaret is made from patal (blend of such types of metal as bronze, brass and copper). The roofing has been shining as gold for the definite period of time.

Climbing upstairs the minaret, you'll get a fantastic view of Khiva city with its myriad of adobe houses with flat roofs and enclosed courtyards; a maze of crooked streets; bright domes and towers of mosques and minarets; winding circuit of the walls.

The construction works of the minaret were held by Islam Khoja, who filled the position of  prime minister. We must pay tribute to Islam Khoja, because he did many useful things for the city. Cotton factory, pharmacy, hospital, telegraph, post office and the secular school, were built for Islam Khoja’s facilities. 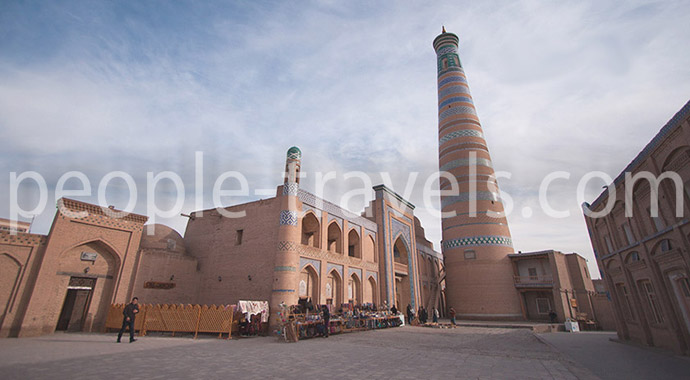 As planned by the architect, the greatness of this minaret is emphasized by the fact that it is adjacent to the smallest madrassah. The central entrance to the small asymmetric madrassah of Islam Khoja is directly at the root of the minaret. In madrassah there are 42 hujras (cells) and a large domical hall. Mihrab (niche in the wall of the mosque) is decorated with ganch (nature mix of clay and gypsum) and majolica. The pane of the building is ornamented with glost.

Today visitors can contemplate the exposition of the Applied Art Museum of Khorezmin in the building of the madrassah. 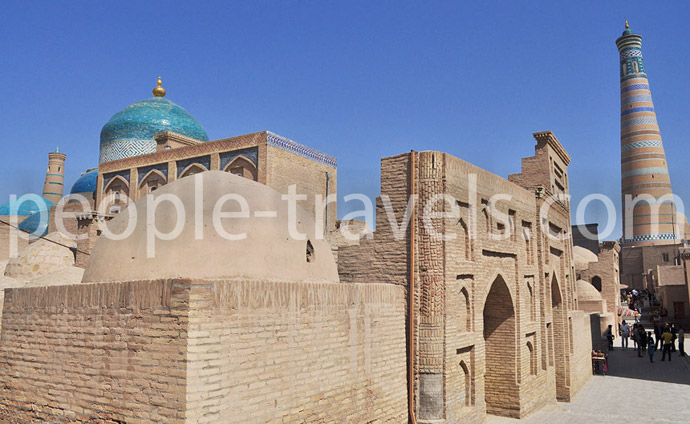 In the south-eastern zone of the madrassah the mosque is located. On the apex of the mosque one can see a bulky low dome; mihrab is adorned with majolica and patterns of ganch.

Islam Khoja Complex is known as the most excellent remarkable sight of Khiva, due to its idea. And it perfectly fits into the scenery of ancient Khiva.

Do not hesitate to choose the appropriate tour round Uzbekistan, offered by Peopletravel Company.