Khiva is a wonderful place for getting acquainted with Uzbekistan firstly.  Once having found yourself here, you travel for a few centuries ago in your imagination. Everything is perfectly preserved - city walls, madrasahs and minarets. You will walk along the wall as well as narrow side streets, and feel the gulp of the ancient East.

If you came to Khiva and did not visit old Ichan Kala, you traveled for nothing. Let’s see this city for oneself, the city in the West of Khorezm region, in infinite space of the Karakum desert, in kilometres-long side from the main “touristic route”. 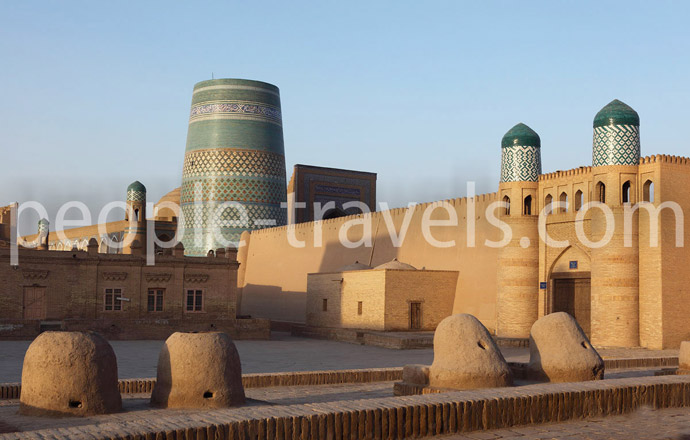 In ancient Khiva the city was subdivided into two parts: Ichan Kala (citadel) or inner city; and Dishan Kala (rabad) or outer city.

Ichan Kala is surrounded with walls, which repeatedly went to ruin and were rebuilt. The pinion walls were erected from clay and have the specific architectural ornament. The adobe (sun-dried brick) was used for building the defensive banks. The walls of Ichan Kala were built in the V – VI centuries BC., and in the course of time were reconstructed for several times.

In 1598 when the Amudarya river again changed its course, and left Gurgandg (the ancient capital of Khorezm) without water, Khiva became the next capital of Khorezm oasis. According to archeological facts, Khiva existed as the station or caravanserai near Kheyvak well in the V – VI centuries. Hence, the archeologists suppose, that the remains of ancient fortification construction around the caravanserai, dated to the V century, make the foundation of the walls of Ichan Kala.

One legend tells us that Sim, the son of biblical Noah, dug the well Kheyvak on the place, where tasty water flew. Probably, Khiva city sprang up around the well. Today we can also see the extant well in Ichan Kala. Another legend says, that during the building of Ichan Kala, the same clay was used while the construction of Medina under the prophet Mohammed. 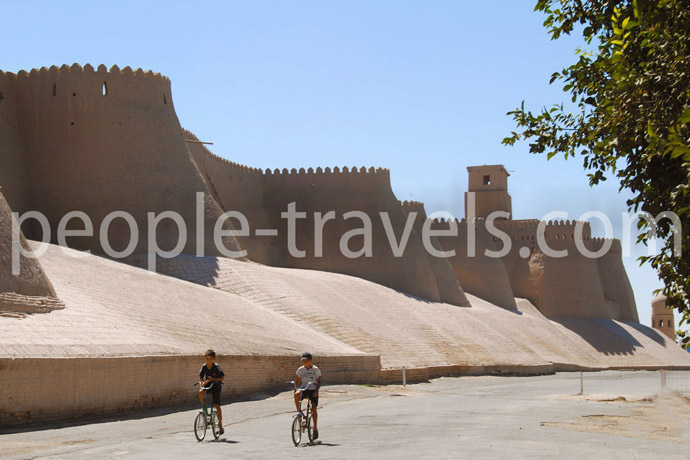 Ichan Kala was given a status of the state historical and archeological culture preserve of Uzbekistan, which is listed in World Heritage of UNESCO. Here are many monuments, but its main advantage is that Ichan Kala is inhabited. About 300 families live in Ichan Kala. People inhabit this region as lived many centuries ago. Generally they are descendants of blacksmiths, engravers and weavers. And it is quite clear. The main source of exuberance of Khiva for many centuries had been trade. In middle ages Khiva was important stopover on the Great Silk Road. All caravans, which made their way towards China and backwards, stopped here. From dawn to dusk, until the gates were opened, the endless stream of moving string of camels laden with baggage.

The inner town Ichan Kala is built in the form of quadrangle. Walls of Ichan Kala have a length of 2200 meters. There are the gates, directed at four corners of the earth. They are Ata Darvaza (darvaza - gates), Bagcha gates, Palvan Darvaza and Tash gates. The gross area of the inner town is about 30 hectares.

Besides the fact, there are few old monuments in the town, Ichan Kala is recognized a holistic and well reserved complex of Central Asian Islamic architecture. On the territory of Ichan Kala there are about 60 historical sites. They are Citadel Kunya Ark, Palace Tash Hawley, Kalta Minar Minaret, Djuma Mosque, Muhammad Amin Madrasah, Alla Kuli Khan Madrasah, and of course the symbol of Khiva - Islom Khodja Minaret.

The historical buildings of ancient Ichan Kala generally were erected in the XIX century, during the governing of the Uzbek or to be more exact Karakalpak dynasty Kungrad. Having visited Khiva, you can easy imagine how the other cities of Central Asia looked in the past. 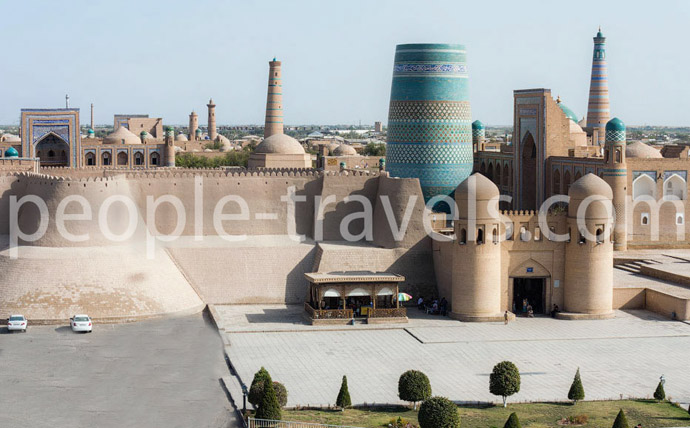 No other city handed down to us in such preservation as the entire part of Ichan-Kala, which is densely built up. As a result, attractions of Khiva are built compactly.

During the building of Ichan Kala the architects of Khiva used the old traditional method of construction in Central Asia – placement of buildings is opposite each other. Such technique was called “twin”.

Furthermore, while the construction of Ichan Kala, the traditional way of building in kind of separate ensembles was used. So, for example, several mosques, madrasahs, bathhouse, arch, caravanserai and the Palace of khan, erected near Palvan Darvaza, composed the original ensemble.

In order to visit Uzbekistan, and get acquainted with the rich and interesting history of Khiva, Peopletravel Company is pleased to offer you a list of tours. During the travel, you will plunge into the world of fairy tales and legends of Khiva. You will know a lot of diverting facts about the architecture and culture of Uzbekistan.