Djuma Mosque of Khiva was one of the most remarkable buildings of this city during the middle ages. It was constructed in XVII century and now this monument is referring to the most ancient mosques of Khorezm.

Djuma Mosque takes quite a large area the size of 55x46 meters. It is located along the major streets connecting the eastern and western gates of Ichan -Kala.

Former in the tenth century Arab traveler in Khorezm al-Maqdisi (al- Muqaddasi) mentioned the Djuma Mosque of Khiva and according to him this ancient mosque was demolished and in its place in 1788 the current mosque was built on the same layout. Exterior view is a little simplified, the height of its walls is 4.5 meters long and its minaret is 42 meters. 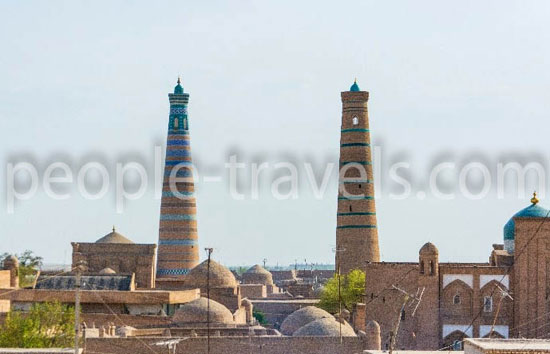 Gate of the monument is facing the front part of the north wind blowing from the north exit to the outside through two rather large light aperture arranged in the middle of the roof of the monument. Under the openings in the old mulberry tree growing local varieties "Balkhi", which provided air cleaning inside the mosque at the time, that is, our fathers and grandfathers achieved thus harmonious biosynthesis between nature and man.

It should be noted that in the old days in the courtyard of the many buildings were planted mulberry varieties "Balkhi akhere" ("akhere" - white mulberry). According to experts, mulberry requires very little water, because its roots are finding it under soil. Thus our ancestors sought the integrity and security of architectural and residential buildings, because mulberry moisture collecting around them, thereby helping to maintain balance on the distribution of soil moisture within the territory and around the building. 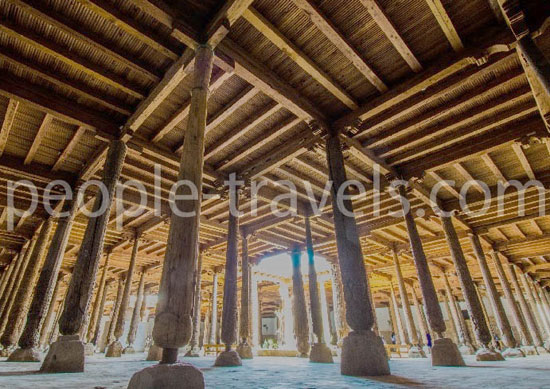 Djuma mosque is a one-story building with a flat roof beam, which is supported by 213 columns, arranged on a square grid of 3,15 x 3,15 meters. Mihrab of the mosque is located in the center of the southern wall. On both sides of the mihrab in the wall as usual, in order to highlight it, arranged Nishke high ceiling mikhrab parts built slightly above the overall ceiling of the mosque.

In 1996-1997, this monument was restored during the restoration of many worn columns were replaced again.