The external fortress city of Khiva

Khiva is a city-museum that was mentioned in the "Avesta" and the works of the "father of history" Herodotus. In every century Khiva were decorating and had no less scenic view than at the beginning of its existence.

We can say that her present architectural appearance continued to emerge until the early twentieth century. Dishan Kala organically blended into the overall complex of fortifications of Khiva, giving them certain completeness.

Dishan Kala is an external fortress city of Khiva . If the outer fortress Ichan-Kala preserved almost completely, from outside of fortifications remained only the gate. Exterior walls were erected on the orders of Allah Kuli Khan in 1842 to defend against the constant attacks of tribes. Dishan-Kala walls had been built over 3 years, and in the construction work involved more than 200,000 people. In the fortress were ten gates, of which have survived, not all.

According to historical sources, the length of the outer shaft was 5650 m height in some places reached 8 meters thickness - up to 6 meters for the construction of the fortress Clay Dishan Kala extracted two kilometers north of Khiva. Now at this point there is a lake , which is considered holy. 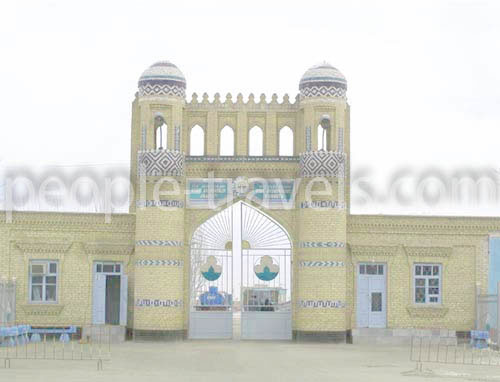 There is also survived several landmarks, such as - Nurullabay palace built in 1912. It is known that it is built to involve local experts and invited Russian and German masters. As a result, the interiors of the palace include elements of modern European modernism, traditional oriental wood carving, stone carving, and ornamental painting.

Preserved fortress Dishan Kala is of great interest for lovers of oriental architecture. According to tradition, in the eastern cities entrance gate had to impress the guest and intimidate the enemy, because the gate to the fortress was not only an important part of the defense system, but also a constituent element of urban design.