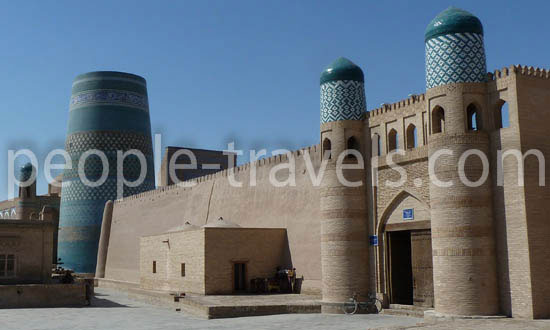 Kunya Ark means "Walled City", is the citadel, which served as a residence for the Khan of Khiva. The ancient structure was a sort of city within a city which housed the premises of Khan, his family and dignitaries for the conduct of public service, entertainment, etc. Kunya Ark Construction was begun in the 17th century's by son of Anoush, Khan Arang Khan, and was completed only in the 18th century. At one time this was a fortress of Khan's hall, harem, seasonal mosques and outbuildings: warehouses, workshops, etc. This Khiva sight can immerse you in the atmosphere of the medieval tales of Scheherazade.

Entrance to the castle gate was decorated like Palvan Darwaza. The towers have been crowned with turrets lanterns, and the architecture to connect them to walls. The area near the entrance used for parades and other engagements, it was also a special place for the sentence execution. Premises of this citadel grouped around court yards and patios connected system corridors.

Architecture building is quite interesting: it has no excess of decorations. Step Tromp, walls and even the dome do not veneered and made of brick. However, during the excavations carried out in the mausoleum, were found carved ceramic elements remaining from the original construction.

In the first small courtyard, which is adjacent to the gate once, after the expected Khan reception. In the second courtyard there were seven guns with carriages, and the third was about Khan's advice. After the corridor opened the largest yard Kurinishhana. From Kurinishhana door in the north-west corner (opposite the entrance) led through the corridor into the harem and the bastion of Ak-Sheikh-bobo, which housed the powder magazine and patrols.