This mosque is located in ancient city of Khiva in Ichan-Kala. It was constructed in 1809 and has its own legend. After all, every devout Muslim, believes his sacred duty to build a house and keep God's work. One such legendary mosques mosque is Bagbanli. Inscription in verse on a stone plate at the entrance reads that the mosque was built in 1809 (1224 Hijra).

Legend has it that the mosque was built with money donated by two brothers - gardeners, respectable people of Khiva. The mosque has a rectangular shape, and the two-column avian winter domed room. Carved wooden columns are of artistic value and decorative columns resemble the biggest Friday mosque Juma. 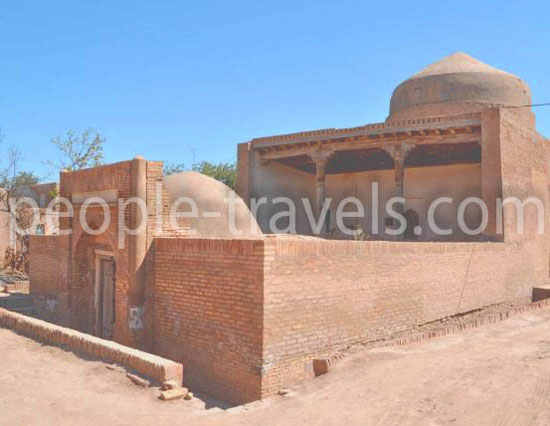 When Khiva became the capital of Khorezm, the written history of the ancient kingdom in the Amudarya numbered more than twelve centuries. Having lived through the era of the Arab conquests, old Gurgandzh fell only during the invasion of the Mongols. After semi- siege son of Genghis Khan ordered the commander of Jochi disassemble the dam and flood the city plundered. On the ruins of the empire was revived again soon Khorezmshakhs independent statehood, which could not be eradicated even Temur at the end of the XIII century often made devastating hikes in Khorezm , opening the field under the ruins of settlements. Two centuries later the decline of civilization to complete the natural disaster . In 1598, for willful Amu changed, leaving the old oases without irrigation and drinking water. Capital had to be moved to a hundred miles to the south, where the caravan route through the Karakum desert fortress existed since ancient times by the well Kheivak, then became a stronghold of the Khanate of Khiva.

Most of the architectural monuments of Khiva belong relatively recent past XVIII-XIX centuries. But perhaps none of the corners of Central Asia ensemble of old buildings not survived to our days in such a scenic integrity, preserving the appearance of a medieval town, which can be subject to metaphysical contemplation. Extreme overcrowding exotic forms, clenched gigantic ramparts in deep stone maze over which dominate the shadow gear towers and minarets, creates the illusion of a single space, fallen out of the ordinary course of time.