A huge part of Khiva’s history

Khiva district includes part of the city and the nearby village. Here, as in other areas of Khiva located some incredible landmarks such as a significant architectural complex Atadjan. Mosque and madrassa Atadjan were built in 1893-1899 years by Atadjan, younger brother of Muhammad Said Rahimkhan II, who was temporarily declared Khan during the Russian siege of the city.

The Atadjan complex consists of summer and winter mosques, schools, baths, etc. During the decline the complex was slightly dilapidated, but today the whole structure is fully restored. Now, here located the center of folk art, where artisans exhibit their products in Uzbekistan.

In 1873 at the request of the first governor-general of Turkestan Kaufman Atajan wrote a letter to the legitimate Muhammad Said Rahimkhan II with a petition to return to Khiva. Then the Khanate of Khiva and Russia signed Gandimyan contract that made Khiva part of the Russian Empire.

And this event played a progressive role in the historical fate of the population of Khorezm. Russian workers and artisans, who arrived to Khiva, brought here Russian culture and new ideas. 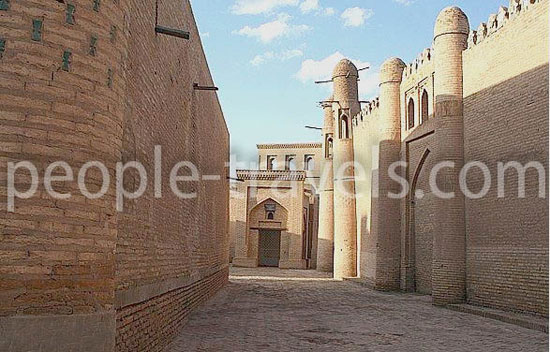 In memory of the events of that time were built Gandimyan gates of Khiva or Gandimyan - Darwaza, which got its name from a nearby village, where the contract was signed in August 1873. During the reconstruction of ginneries the Gandimyan gates were demolished, but due to surviving sketches and photographs of the 70- ies of XX century this gates were rebuilt.

Atadjan complex and Gandimyan gates are a huge part of Khiva’s history that conserve the inheritance of the art and culture of our people and transmit it to the next generations.