In the inner town of Khiva between the covered bazaar Tim and the Eastern gates Palvan Darvaza the tourists can visit Allakuli Khan Madrasah. Peopletravel Company is pleased to offer the unforgettable trip to Uzbekistan, mainly to Khiva where you will see the most outstanding historical monuments of medieval of Central Asia.

The madrasah was built by order and means of Allakuli Khan in 1834 – 1835. Allakuli Khan, in order to make Khiva one of the picturesque and attractive cities of Asia, implemented large constructive and well-planned works, proceeding from his possibilities. Having demolished decrepit and collapsing old madrasahs made from framework and adobe, he asked skillful masters of those times to build new madrasahs from baked brick. 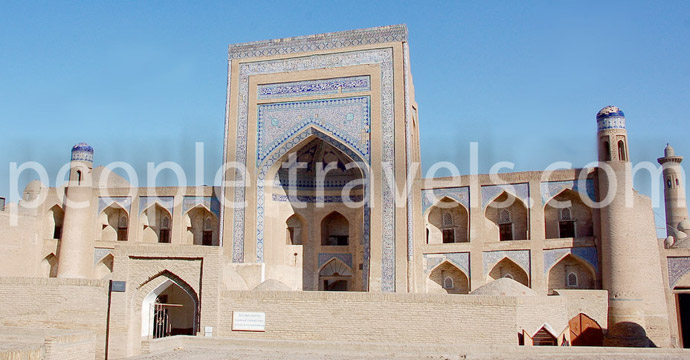 The beautiful Allakuli Khan Madrasah on the place of Ichan Kala wall can be ranked to such buildings.

Allakuli Khan Madrasah was started to build after the constructing of the bazaar Tim. Before the beginning of the construction one part of Ichan Kala wall, bordering upon Khodjamberdiy Madrasah, and several domes of Palvan Darvaza gates were pulled down. The remains of the walls were leveled and the portal of Allakuli Khan Madrasah was erected on this place. This portal is located facing the door way of the opposite Kutlug Murad Inak Madrasah. As a result on the newly formed square the traditional architectural form kosh (twin) madrasah was built. So the main facade of Allakuli Khan Madrasah overlooks the yard of Khodjamberdiy Madrasah.

The specialists mark the architecture of Allakuli Khan Madrasah as the Khorezm style of late medieval. But for the visitors this madrasah is the amazing construction, which astonishes people by its beauty and refinement. In the decor of Allakuli Khan Madrasah there is the painted majolica in black, white, blue tones, covering vertical surfaces, semivaults and over portal constructions. 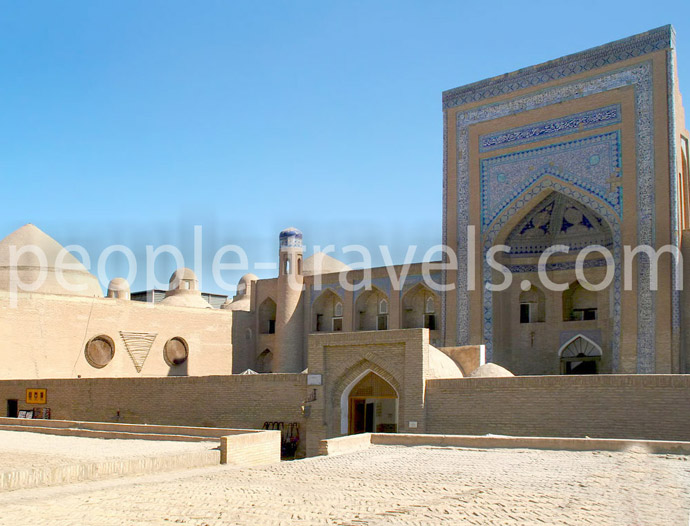 The colour gamma and ornamental motives of the majolica are various everywhere. Depending on the place the artists and ceramists chose well the scale and type of the print, colour saturation of the pattern. The refined facade part of the portal, saturated with bright majolica impresses especially.

Undoubtedly, Allakuli Khan Madrasah has its memorizable fascination. It is often considered the most beautiful  madrasah in Khiva.

Allakuli Khan Madrasah has the right-angled form with 99 cells. The portal is traditionally divided into two zones: the mosque is in the right part, and the large lecture room is in the left part.

Earlier on the first floor there was a library, which supported all students of Khiva with books.

Today the madrasah is the historical museum of medicine after Abu Ali ibn Sino.

To make a travel to Uzbekistan, please book a trip among the tours listed below.