Abd Al Bobo Mausoleum is located in the eastern part of Dishan-Kala in Khiva and was built in the 18th century. The mausoleum was constructed in honor of Abd Al Bobo or Akhmad Palvon Zomchi. After the Arab invasion to Central Asia, Abd Al Bobo was one of the followers of Islam in Khiva.

After his death around the site of his burial were built the complex that comprises two religious buildings, minaret and a basin. Abd Al Bobo Mausoleum was erected accordion to Bukhara style of architecture because Abd Al Bobo was a native of the Zamchi village, near Bukhara and considered as a distant descendant of the Muhammad Prophet.

In the early centuries of Islam mosques intended to be a place for praying, this building was a sort of house, sanctifying the lives of people of all periods of various ceremonies, rites. Basically, they were built in public places and near the bazaars. 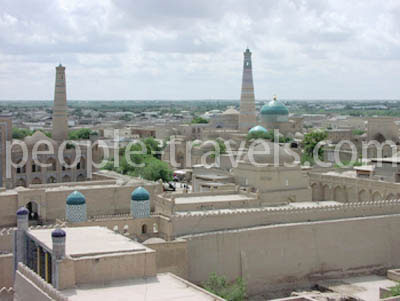 The shapes of most mosques are very different from each other, but in spite of this in their structure remained single composition - this building with a small room at the front of avian limited.

Abd Al Bobo summer and winter mosques repeat the tradition of religions buildings. Hall can comprise a dome and iwan as a portal gallery jewelery monumental form or in the form of flat, flat roof of the overlapped beams resting on wooden pillars obstroenny ayvans.

On the south side of the Abd Al Bobo complex there were no any openings on the outer part, because in its internal parts located mihrab (a prayer niche that oriented in the direction of Mecca). This feature of Khiva mosques is very rare. But you can see this this type of religious construction you can discover in Abd Al Bobo complex.

Abd Al Bobo minaret is relatively small with a height of 10 meters, and a diameter of base reaches 3, 2 m. However, this minaret is very expressive, dramatically shrinking the diameter of the barrel up plump, crowned with elegant cornice.