Emergence of the first states in Uzbekistan refers to VIII-VII centuries BC, with the establishment of such states as Khorezm and Bactria. In the third century BC Alexander the Great conquered Sogdiana and Bactria, married Roxane, the daughter of the local governor of Bactria. Resistance to the invaders was fierce, causing Alexander's army to stay in the area. With the IV century BC begins flowering of ancient Khorezm. Starting from 305 to 995 year dynasty ruled Khorezm Khorezm Afrigidov. In the VI-VII centuries, most of the territory of modern Uzbekistan was part of the Turkic khanate, and then the Western Turkic Khaganate.

One of the major cities - acropolis in Central Asia, which for many centuries was the capital of the Khorezm state. The city was founded about 2,400 years ago, as a result of the transfer of the capital from Kuhn Urgench (modern Turkmenistan). The city was located on one of the branches, in the lower reaches of the Amu Darya River. Due to natural disasters this sleeve has dried or changed direction, and Kuhn Urgench was abandoned. Now the city is located in the Khorezm region, 25 km from the administrative center of Urgench. The town consists of two parts - Ichan Kala (Inner City) and Dishan Kala (outside city). Ichan Kala is surrounded by perimeter walls and fortifications have several gates. There are many buildings from different times such as madrassas honakoh, mosques, and minarets, the palace harem dungeon (jail), craft shops, stalls and houses of the nobility. 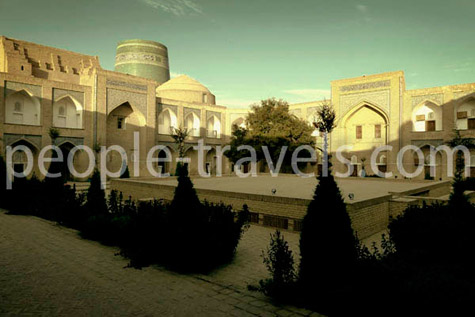 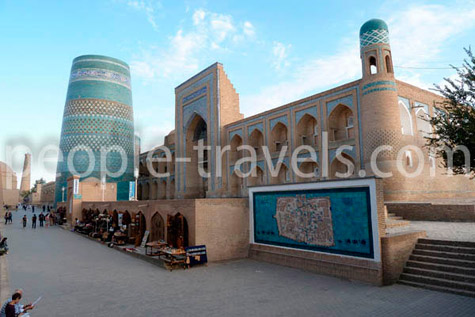 The political history of Khiva filled with numerous conquests of the neighboring countries and internal feudal strife. Khiva history waged a fierce war against the Khanate of Bukhara to establish its rule across Central Asia.

Complex, contradictory, full of political and social upheaval the path was traversed by the peoples of Central Asia and the impact on cultural life. Development of culture proceeded in line with the changes taking place in the socio-political life. The activities of the Central Asian scientists based on the achievements of the earlier period. Studied and commented on the works of scientists of past centuries.

Epoch of the Shaherezada’s tales 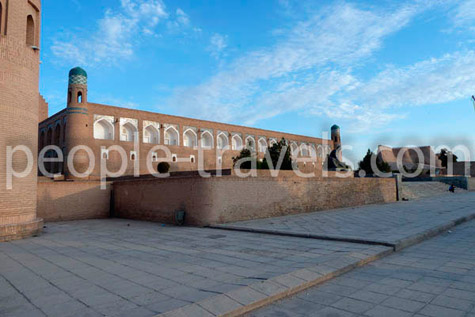 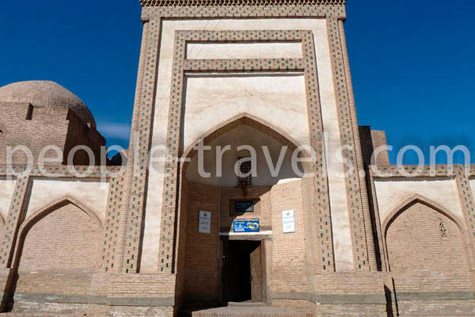 Since ancient times Khorezm controlled northern trade routes from Central Asian interfluve. Khorezm was for the whole region the Holy Land ("ayranvaychah") Avesta, the center of ancient cults. State association in Khorezm already existed in the 7th century. BC Archaeological evidence suggests that in the second quarter of the first century BC in this region was a powerful irrigation network, feeding of the Amu Darya. In the middle of the 6th century BC, Khorezm was conquered by the Persians, led by King Cyrus.

This king was killed in battle with the nomads - Massagets led by Queen Tomiris. According to legend, Tomiris ordered to cut off the dead Kira's head and dip it in a bag filled with blood to sate its bloodthirsty enemy. In 4 and 5 BC Khorezm seeks independence from the Persians. Befinning form 4th century BC Khorezm became known writing, the royal residence - Toprak-kala, the ancient mausoleum, a temple and observatory - Coy Krylgan-kala. 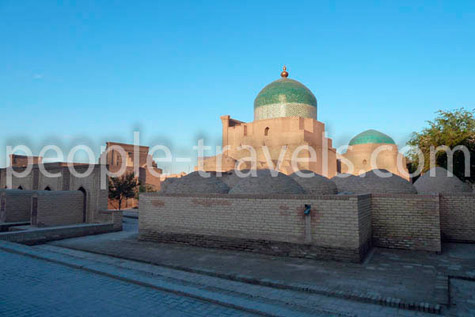 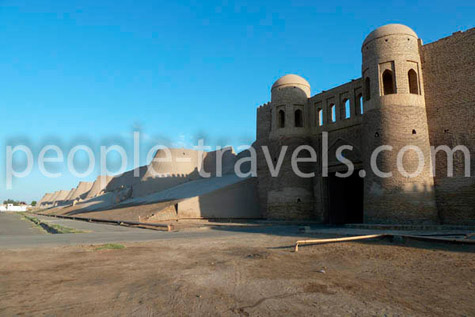 Holy places occupied a special place in the life of Khiva. Monumental architecture was re-emerged city, which now affects the energy with which he had grown up in the course of only two or three generations of artists. Ichan-Kala - the overcrowding part of Khiva, became fated to an architectural museum, on whose monuments reveals the best works of folk artists. One of the most revered sites - Memorial Pahlavan-Mahmud. Madrassa is the largest Muhammad Amin Khan. The city is considered the spiritual center of the Great Mosque.

Khiva is one of the major cities of Central Asia, where there are no buildings, busy road, etc. here are still living antiquity lives in every street. In the heart of the Karakum Desert is a city-reserve, the city, one of the main centers of the Great Silk Road, which to this day, almost intact preserved over hundreds of monuments of different eras and nations.

In every city of Uzbekistan you find a huge number of museums with interesting exhibits. The state was on the Silk Road, so that is very actively developed. The museums and galleries you can see the unique items that will touch the history of the ancient state. 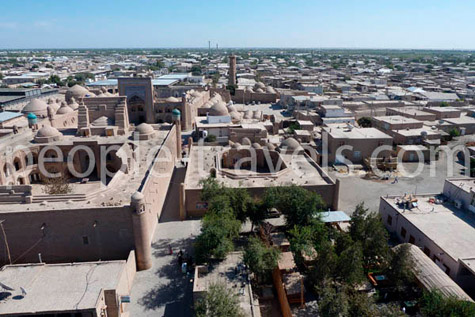 Every year in Uzbekistan is developing different types of tourism. So, for example, are becoming increasingly popular ethnic, ecological and adventure tourism. You do not just learn a lot about the Asian country, but also imbued with the very spirit of the ancient history of Khiva and other cities of Uzbekistan.

Discover the history of Khiva and its legends, and you will be impressed by its magnificence and oriental grace. Peopletravel offers a wide choice of fascinating tours that will forever remain in the memory as wonderful and incomparable moments.