You are always in our hearts

Memorial «You are always in our hearts» in Karshi

The eternal flame symbolizes the everlasting memory of those who gave their lives for peace and tranquility, no matter who he could win the victory. Memory we cherish. In each city of the CIS has alley, dedicated to the fallen in the World War 2.

In Karshi this memorial searves the area of memory with an eternal flame. This monument tells us that nothing is forgotten, no one is forgotten. The war touched every family of a big country. This monument is helpful past, protects us from rash decisions and humanitarian action. In every city there is an old mahalla plate with the names of bad the defenders of the homeland, fighting for our current prosperity. We must honor their memory and learn the lesson of the war.

Eternal Flame is a sacred place on the area of memory. Here comes the young rake, wise old men - they think, looking at the monument to the names of Uzbeks, who died bravely on the battlefield. 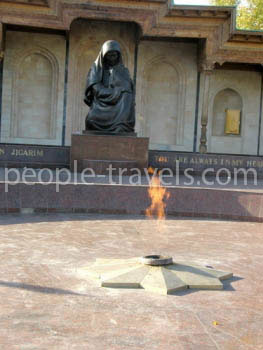 Newlyweds and simple onlookers, Newbie here, always paid their tribute, performing sacred ritual - a moment of silence. Then they throw coins to the pedestal of eternal fire. Some people believe that this will make come true wishes will come true, if clean and moral.

The monument consists of a slope and sad woman. It embodies the country and every mother whose son did not return home from the war. More than a million soldiers and officers lost in the Uzbek land bloody and brutal war.

Each May 9 here commemorate heroes and warn the younger generation from hasty and emotional action. After all, leave the last witnesses of the day, having drawn out of the horror of war wounds. And then just have the memory and the monument of the Sorrowful Mother.

"You are always in our hearts" - sounds the inscription on the monument. It is one of the most attractive sightseeing in Karshi.