Uzbekistan is one of the oldest centers of human culture. Evidence of this is known examples of cave paintings and inscriptions. Until today were studied more than a hundred other places. In Kashkadarya region was also found many petroglyphs as samples of ancient cultural heritage occupied by such monuments as the cave Langar - Konizor, Turk Kurgoni, settlement and Sapiltosh Siypantosh place - that is translated into Russian as "stone worship."

After many years of archaeological research was found that the southern part of the oasis Kashkadaria beginning to accustom people back in the Paleolithic era. It was massively studied during the early Paleolithic period on Mount Angillok of Okchisayskiy oasis. And Kuruksoy is located in the oasis; there is a unique chapel, erected in the last periods of the Stone Age and the locals called "Siypantosh."

On the smooth surface of the rock and the surrounding Siypantosh reflects the various symbolic signs in the style of drawing, painted brown, dark red, pink and yellow ocher colors. Figures demonstrate the hand prints, hunting, wild animals and 29 short strips, which are treated by some scholars as symbolic signs denoting ancient calendar and 4 seasons. 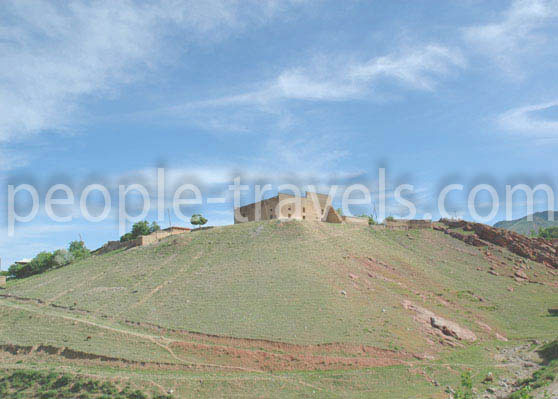 Here, the rock carvings are mostly represented by different geometric shapes, in some cases, executed in different colors. They served the people for the calculation of days in the lunar and solar calendars. Cave paintings were depicting the image of a human hand elongated by slender fingers. It was a kind of symbols, warning of disaster.

In general, according to experts, these drawings and inscriptions reflect a representation of the people of the Neolithic about space and time. The researchers of this place pay tribute to the rock paintings shown on fragments of the once solid stone block. Researchers attribute these figures to the era of the emergence of iron, when people were engaged in animal husbandry.

Overall Sapiltosh contains 26 drawings that can rightly be attributed to one of the great cultural monuments of the region. It remains only to note that most of the well-preserved drawings and inscriptions of Siypantosh town are the pieces of the world's cultural heritage, much of their content exceeding the known examples of the work of the Neolithic Eurasia. Some samples show people's attention to important issues such as the cosmogony in general and in particular time.

Therefore it is necessary to continue to explore the rich past, once again proving that the region Kashkadari is one of the places of origin of civilization in Central Asia.