Ancient stones or Old Bridge of Nicholas in Karshi

In Central Asia there are many surviving unique structures such as magnificent architectural ensembles of Bukhara and Samarkand, Tashkent mosque and minarets.

Among them rightfully takes its place awesome bridge built in the 16th century of brick across the river Kashkadarya. The bridge is 122 meters. If we add the width of more than 8 meters and a height of about 5 and a half, we see the magnificent structure of the past. Hulk Bridge rests on twelve powerful foundations, which are connected by fourteen low and wide arches. Between the arches are powerful cylindrical buttresses.

When Kashka expanded its channel, the bridge was reconstructed. The renovation was completed in 1914. Construction has changed its look. It rose to lengthen on both sides of additional foundations. Moreover, at the entrances were built two sentries of brick pavilion. But later, in 1960, they dismantled because it should pass wide trucks. Ancient stone bridge cover paved and fenced side walkways metal grille. But in this, the change is a modern twist, as the bridge is still majestic and monumental. 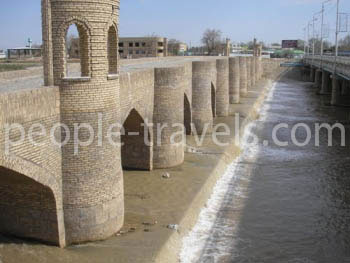